Home » » Fishermen along with the tsunami affected gather for a huge protest Island wide to win their rights.

Fishermen along with the tsunami affected gather for a huge protest Island wide to win their rights. 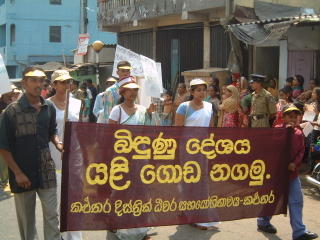 On the 15th of July all the tsunami affected countries commemorate 200 days after the unexpected disaster. On this day as a nation we have to have a feed back on the progress of the country after the tsunami. It says that the relief, reconstruction and rehabilitation activities are a must but we have to consider how far these objectives have been achieved to rebuild the nation. It is obvious that various agencies such as NGOs and INGOs have initiated the above activities while the government doesn’t have an ongoing plan to be implemented in the tsunami affected areas so far. Let us view how we have achieve the progress:
F There are 90 000 displaced people still living in the tents and temporary shelters since December 2004
F There are 500 000 people displaced and living in various other places
F There are only 28000 temporary shelters have been built by the NGOs and other agencies while the government have done none
F Even though the opportunities have been created by the NGOs to build permanent houses for the victims the government have not sorted out the case of resettlements
F The affected families received the relief assistance[ compensation of Rs.5000] only for two or three months
F Due to the band of buffer zone the fishermen don’t have a free lands to continue their day to day fishing
F FAO says that there is a over supply of fishing gears in almost all the affected district but the majority of genuine fishermen didn’t receive the so called fishing gears
F There are only 1600 permanent houses have been built by the NGOs, political parties and other private donors
F The debris in the cost and the sand filled lagoons still need to be cleaned, restored and rehabilitated
F The income generation activities need to be assisted to strengthen their economy
F The corruptions and the malpractices have increased because of the relief and rehabilitation activities
F Sexual harassments and so called other crimes are big problems in the camps

All the above mentioned facts reveal the irregularities in the relief activities on the part of the government putting the victims into a very pathetic situation. Ultimately who suffer..???

Is there a proper governmental plan?
F To revive the fishing industry
F To resettle the displaced people
F To repair & rebuild the new houses
F To provide relief assistance who are really need
F To rebuild the small industries

It is clear that the government gives priority to the tourism industry. Constructing houses is a band but the hotels are being built around the coast without any restrictions. Under the tourism master plan, the government declares 15 tourism zones such as :

We are the victims of tsunami. The top level decision makers called TAFREN has been appointed by the government, but up to now they have done nothing to cater to the needs of the people. Through the documentary programs and other ways they are trying to promote themselves as the only savior of the people, but such boating statement are proved to be lies when visit the tsunami affected areas and when we meet the victims.

Today, the 15th of July 2005 People are ready to get in to the roads against the tyrannical ruling procedures of the Sri Lankan Government and to awaken the authority to perform a sincere and honest service to create a normalcy in lives of the tsunami victims. A series of protests will be held in seven districts including ten locations. All the members of our partner organizations, the tsunami victims in the camps, the fisher leaders are waiting to flock together in the protest.

The hot news about the protests will be published an hour to hour. Therefore please be on line……………..
Share this article :
« Prev Post Next Post » Home