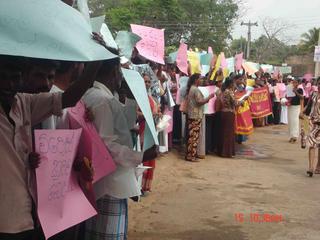 This protest was carried out near the Hambanthota main Bus stand. There were between 300-350 Victims with posters and their banners to force to the government to get their own rights. Specially many fisher women and children also had come to protest against the government to day after passing 200 days for the destructive tsunami. Participants were people from the many refugee camps [. Kadurupokuna,Medaketiya,Weeraketiya]
in Hambantota district. That has been organized by the Hmbantota District Fisheris Solidarity with the Help of NAFSO.After this protest the Petition had been handed over to the Secretary of Hambanthota District Office. Some special people had come from Thangalla Division also.
Share this article :
« Prev Post Next Post » Home