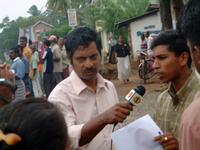 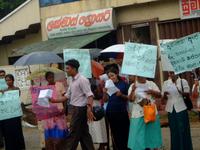 Place: In front of the clock tower at Wadduwa.

How many people have joined: 450 people.

From where the people have come: Victims have come from two camps in addition to that from the following villages

According to our reporters the protest began at 10.20 a.m. The proteset has been supported by the Police by giving the security with the guns in hand. They marched towards the D.S. office with all the banners and posters in hand. They met the District Secretary and submitted the petition. She accepted it very happily and she promised that the compensation will be re-continuing very immediately and the compensation cards will be provided. Next week this issue will be taken to be discussed. The media coverage has been given by SIRASA TV.
Share this article :
« Prev Post Next Post » Home