Home » » The Summery of the Protest

The Summery of the Protest 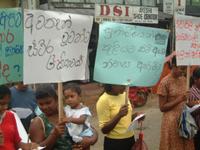 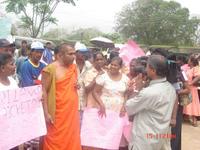 National Fisheries solidarity is launching a vital tsunami rehabilitation program for the shake of Victimized people who were affected by the mass destructive tsunami on 26th of December 2004. As we believe to day was a special date for us because we launched a biggest protest all over the island to open the eyes of responsible authorities of the government. Not only that we would like to emphasize to the universal that the government didn’t have any clear and a success development process to rebuild the affected people so far. Reality is now 200 days have been passed for tsunami by now. We think that you may already have been visited to our web site. There more than 5000 victimized people gathered to defeat the tyrannical TAFREN plans and stress to the government that to day they have got in the roads after passing and waiting 200 for disaster with the help of these following NAFSO partner organizations.
« Southern Fisheries Organization [SFO]-Galle
« Southern Fisheries Organization [SFO]- Mathara
« Kaluthra District fisheries Solidarity [KDFS]- Kaluthara
« Sri Vimukthi Women Organization [SVWO] - Negombo
« District Fisheries Solidarity[DIFSO]- Ampara
« Negombo Lagoon Fisheries Organization [LFO] –Negombo
« Puttlam District Fisheries Solidarity [DIFSO] – Puttalam
« Prajashakthi Foundation [PSF]- Puttalam
« Praja Vimukthi Foundation [PVF]- Kurunegala
Victims ask what happened to the US $ 3.2 Billion has come from many countries to rebuild the victims. As all the NAFSO partner organizations, they will invite all the comrades and to the other people to join with NAFSO being human in the world to rebuild the nation.


The special points of the day
« Having finished the protest in Puttalam District Fisheries solidarity had come to hand over a petition to the district secretary of Puttalam District office. By that time all the respo9nsible authorities had vanished from the office to avoid our people.
« When the DIFSO [Ampara District Fisheries Solidarity] submit the petition to the District secretary he has promised them to issue the 5000 subsidy to affected families again.
« In Mathara District after sticking the posters to inform, people to join to the protest o 15th July, There Mathara District Secretary has visited with the other officers to every refuge camps at Mathara to prevent their attention for our protest. The joke is he had told them to come to the District office to get their lands.
« There in other districts we could see very success full process in to day in regarding this protest

Finally we would like to than for all the media sponsors who come to make success our protest and to reveal the truth for people.