Home » » The International struggle against the WTO

The International struggle against the WTO 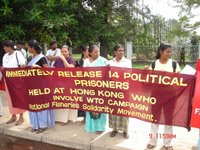 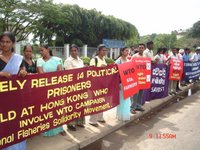 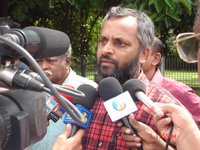 National Fisheries Solidarity and the its partner organization as well as the alliance of the National & Human resource protective, organized a big campaign in front of the Sri Lankan Chinese embassy forcing to the high commissioner of china and its authorities to bail the Korean, Thailand, Chinese, and Japanese 14 rebellions who are in jail in Hong Kong yet. Representing farmers, women, Labors, and specially fisheries organizations who are working against Hunger and for the rights of poor in Sri Lanka many crowed had participated to hand over a petition to the high commissioner of Chinese at the embassy. Especially the General Secretary to the World Forum of Fisher People (WFFP) participated to this occasion and addressed the campaigners

When they were struggling for the sake of all the poor people in the world 17th December of 2005 in Hong Kong at the ministerial meeting of World trade organization those Campaigners were arrested as in democracy manner by the Hong Kong military Police forces. Until they go their mother lands we would like to emphasize with out nay hesitation we are not ready to stop our international Campaigns. After the campaign the competition was to be handed over, they didn’t accepted by any responsible officer at the embassy. As Asians we deplore this unjustifiable work.
Share this article :
« Prev Post Next Post » Home