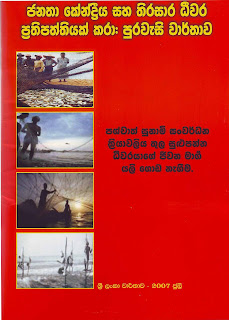 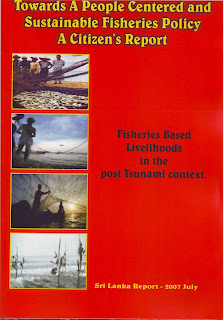 With the theme of “Protect Fishers, Farmers, & Workers Right to Livelihood” NAFSO joined with Sri Lankan World Social Forum, which had been organized by MONLAR and JANAWAKASHA organizations and publicized the two reports gathering more than 100 participants and they were aware about these reports in the World Social Forum (WSF) ON 26th January 2008 Colombo at Vihara Mahadevi Park Open Air Theatre.
The matters emerge through reports and effect to the people, Effect of the war and Fisheries sector people, the influence of illegal fishing methods and gears to destroy of fisheries as well as reactions of the authorities, fuel price, fishing equipment price and fish price, Did the government has fulfill the requirements of tsunami displaced people, the reality of the inland fisher’s life are some of main topics, which were discussed of the NFSO space in WSF.
The National convener of NAFSO Mr. Herman Kumara and the National Coordinator of Advocacy Policy lobbying Mr. Nalaka Rosairo and some other NAFSO Secretariat officials represented on this occasion.
There more than 3000 participants attended to the Sri Lankan World Social Forum this time representing various sectors Estate workers, farmers, fishers, women organizations, and some of youth and environmental organizations also joined with trade unions on this occasion to make this opportunity a very successful one and raising their voice to through out this world and their aim is to create a better world as well as they worked as a human chain for their justice.