Demand the release of Tamil detainees in Sri Lanka 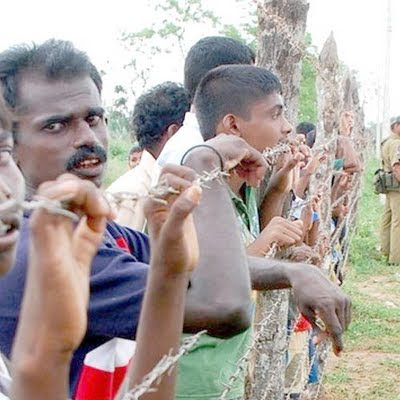 The Socialist Equality Party in Sri Lanka and the World Socialist Web Site are launching an international campaign to demand the immediate and unconditional release of more than 250,000 Tamil civilians who have been detained in huge internment camps since the defeat of the separatist Liberation Tigers of Tamil Eelam (LTTE) in May.
The government falsely describes these squalid prison camps as “welfare villages.” However, detainees are not permitted to move in or out of their camps, which are surrounded by barbed wire fences and guarded by heavily armed soldiers. Relatives are allowed to see inmates only after the type of rigorous screening found in high security prisons.
Those inside are civilians—young and old, men and women—who lived in former LTTE-held territory and were simply herded into the camps. They had already suffered months of military blockade, with many starved, dehydrated, wounded and sick. Numbers had lost family and friends as a result of the army’s indiscriminate shelling read the full Story
News Source: World Socialist Web Site
Share this article :
Labels: displaces, Tamil displaces, War displaced in SL
« Prev Post Next Post » Home