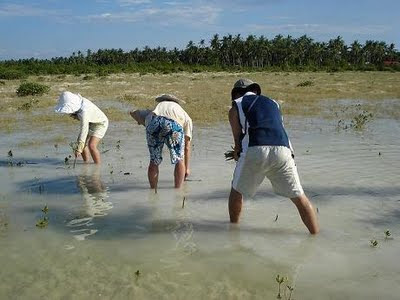 Masbate City (5 October) -- Nothing like starting them young.
The city government on Saturday (September 26) organized its residents to plant mangroves in Barangay Pawa, and tapped Sangguniang Kabataan (SK) chairs to lead more than a thousand government officials and employees and members of various private organizations in the mass mangrove planting.
Rogelio Magalang, the city agriculture officer, said the mass planting was not only part of the 9th city anniversary but also the best effort to restore the mangrove cover along the coastal area.
Mangrove forest does not only provide coastal communities with natural armor against tsunamis but also create fish and wildlife sanctuaries, and Mayor Socrates Tuason acknowledged this by initiating the massive mangrove planting, he said.
Government data showed that from 1951 to 1998, around 75 percent of mangroves in Masbate were cut down to make way for fish ponds.
Aside from conversion to fish pond areas, mangroves are also being decimated by subsistence wood gatherers and makers of charcoal and Christmas trees.
Tuason hopes to reverse this grim state through massive mangrove planting and alternative livelihood projects for families who eke out a living from mangrove forests, he said.
Other participants to Saturday's mass planting: city council, barangay captains, police, City Hall, Department of Education, Municipal Trial Court in City, Commission on Elections, City Prosecution Office, Bureau of Jail Management and Penology, and Coast Guard.