APNL condemning of arresting fisher leaders in a press release 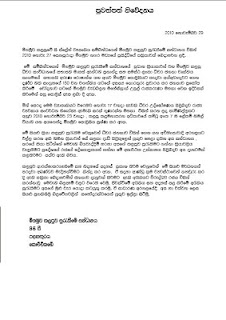 for Protection of Negombo Lagoon" had issued a media release today condemning arrest of two fisher trade union leaders while they were educating general public distributing a leaflet on on going sea plane
issue on Negombo Lagoon yesterday.
It further reveals that, fishermen are frustrated with the effort of regional politicians have been taking to prevent fishermen involvement in protecting the lagoon.
The alliance finally says that they have committed each other to defeat government suppression on all kind of communities in the country and all come forward to protect the lagoon as well as freedom of expression.
Share this article :
« Prev Post Next Post » Home