Home » » A media Conference to answer the accusations of the Government and to revile the life threatening situation of Mr. Herman Kumara, convener of NAFSO

A media Conference to answer the accusations of the Government and to revile the life threatening situation of Mr. Herman Kumara, convener of NAFSO 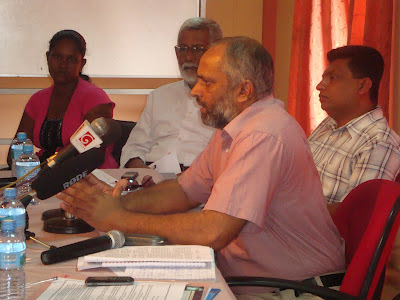 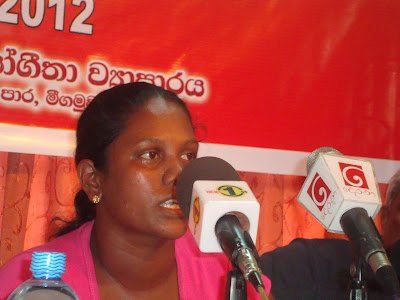 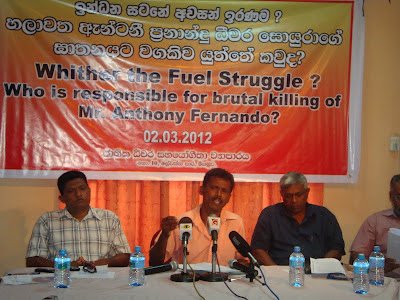 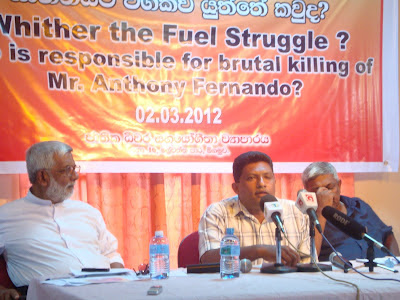 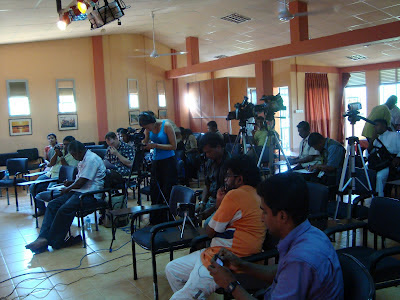 Several electronic Medias and news paper journalists were participated to the news conference and Mr. Herman Kumara appeared publicly for the third time for two weeks of living in danger. Still he living in safe hose in undisclosed location since the several attempts of following him with several bikes in 25th Saturday and with green color car which has a Number plate (301- 2865) not registered in the government Vehicle registration office, after he left the Bandaranayake International Airport on 24th Feb, after arriving from one week of official foreign tour.

There are many individuals including journalists disappeared during recent past. I do not want to be disappeared, If you want, you can arrest me with warrant. I do not fear to face any legal action in proper way. If something bad happened to my life, my family or collogues, the government is responsible for that. Mr. Herman Kumara told to the media representatives present in the event. We have history of strong protests against several governments. We do not work for the political parities but for the depressed people Mr. Herman Kumara added.

Mrs. Nadeeshani, a fisher women and mother of two, from Negombo expressing her views on the chain of events happened after increase of fuel price, told that fisher are not any more blunt, we have some sort of consciousness than the past, we can lead ourselves to fight against unfair, because we feel our children’s Hunger, NAFSO did not interfere our fight this time, we came to the road our own. The authorities must be ashamed to shoot and kill a fisherman while wounding several, who fought for their hunger not for separate the country or change the government.

Mr. Loyel peiris, a fisher leader from chilaw area also address the media and told that the government has the full responsibility of the killings. Negombo and chilaw fishers came to the road because they are the people who need amount of kerosene than the other areas’ fishermen in the island. The day boat must go to the deep areas to fishing, if not we cannot do our job with the fishing equipment we use. To reach the deep sea we have to burn much kerosene than the others since the deep sea is far away from the coastline relevant to the other areas of the coastal belt.

The subsidiary provided by the government is not enough for the fishermen. We do not need subsidiary, but we ask the government to provide fuel to us for previous price. If not we cannot hold this anymore. Befor the price hike we spent about 3000 LKR for a day but now we have to spend about 5000LKR, small scale fishers always borrow the money to do their fishing operation. It is no way to earn that much of money from the fishing every day. We have to feed our families. Send our children to schools. How can we do that with empty pocket?. Government must response sooner, if not fishers will not bear this burden for ever.

Government always accusing the NGO and CBOs for every fault done by government authorities or every up rice of the people. They used to tell that, NGOs with foreign funds, (US Dollars) are working with hidden agendas is making conspiracies against the country and the government. Mr. Brito Fernando, leader of platform for freedom reviled that, Even Hon. Precedent of the country have use the NGO money in the past, to go to Geneva in 80s against the UNP government. Dr. Rajitha Senarathne must revise the past fights they fought against UNP government. He has use the leaflets printed by the NGOs with US dollars in campaigns against privatization of the education and so many other times that they have use the NGO resources.