A protest was conducted against killings protester in waliveriya who asked to close down the hand glows factory.
Protest was organized by the Force of unity. about 1500 to 2000 people were participated to the protest. 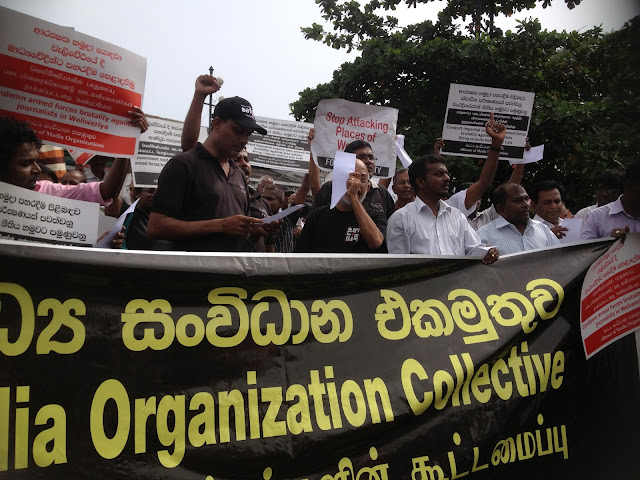 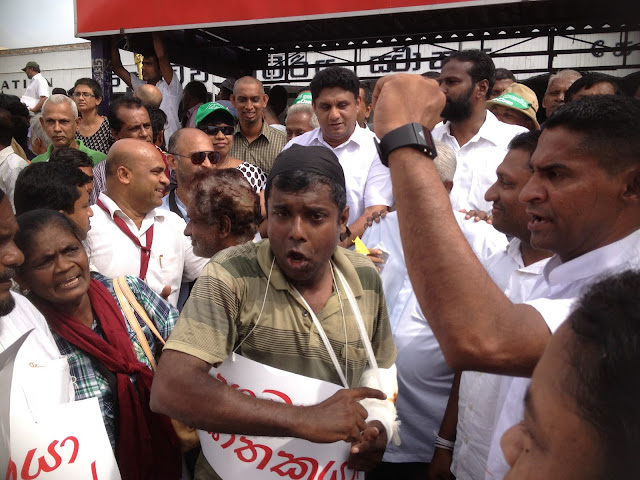 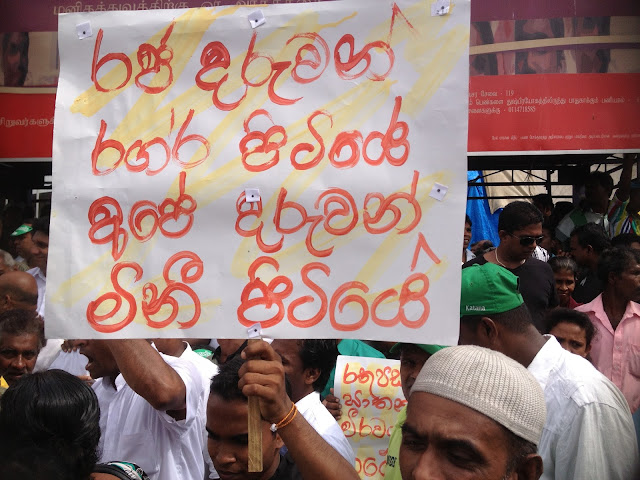 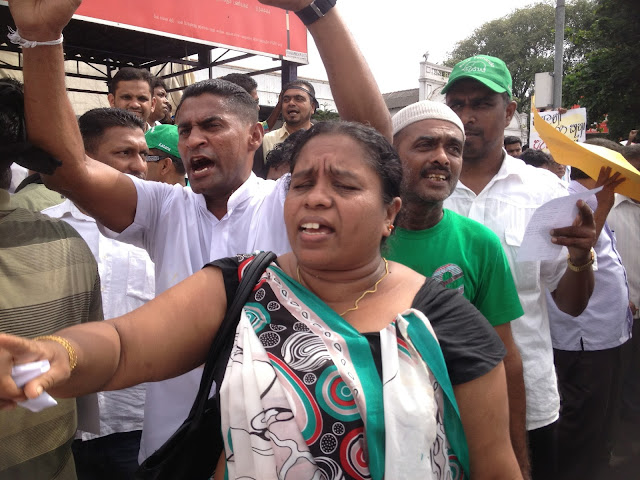 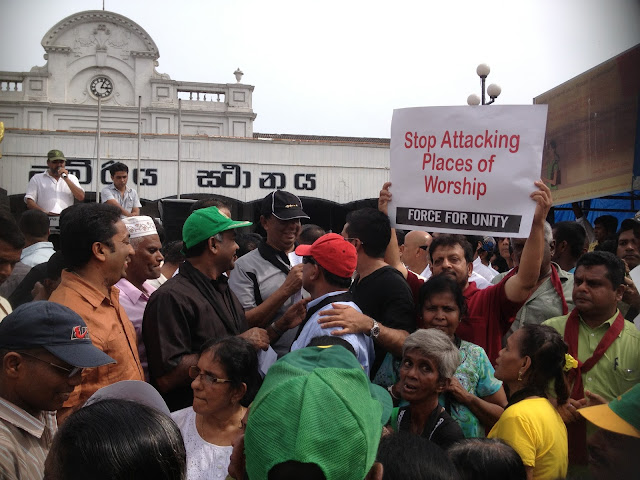 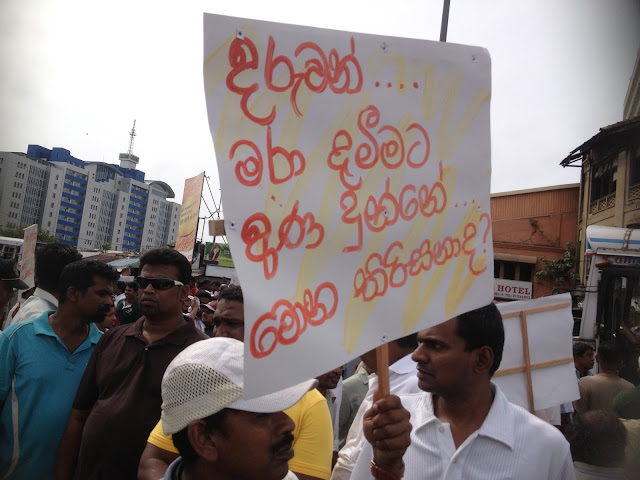 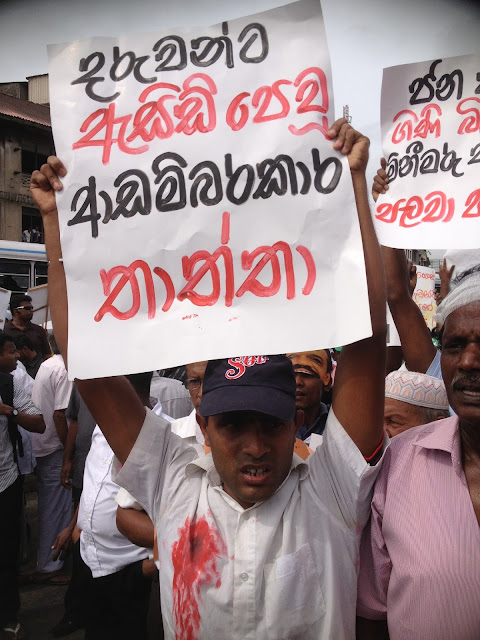 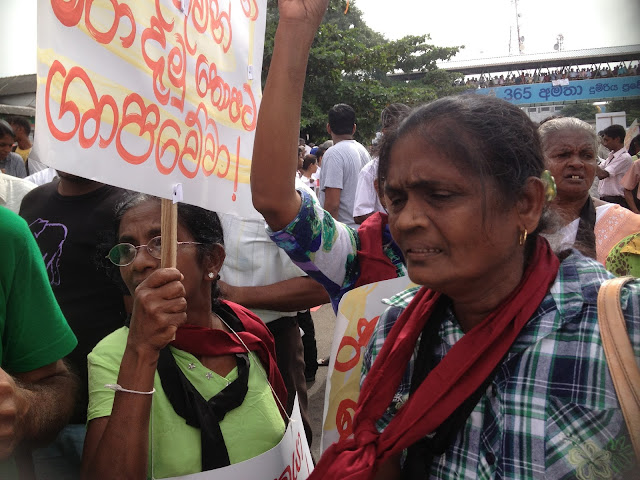 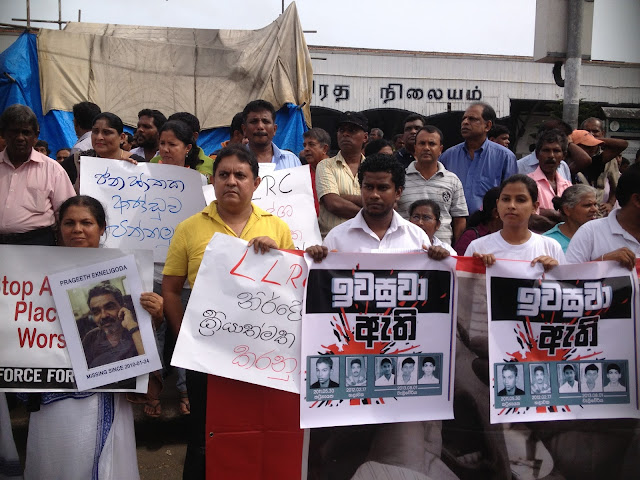 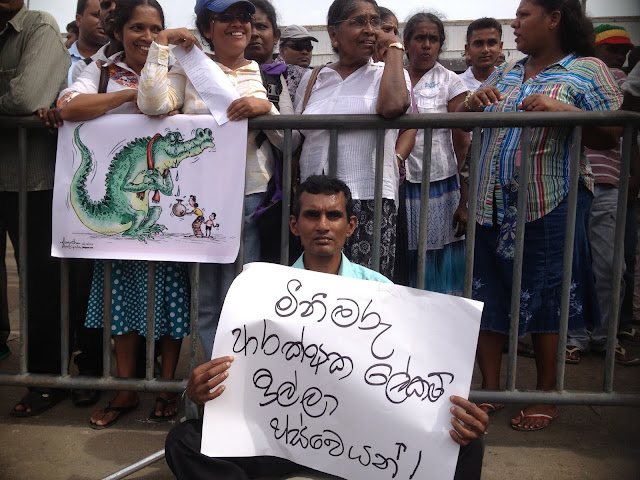 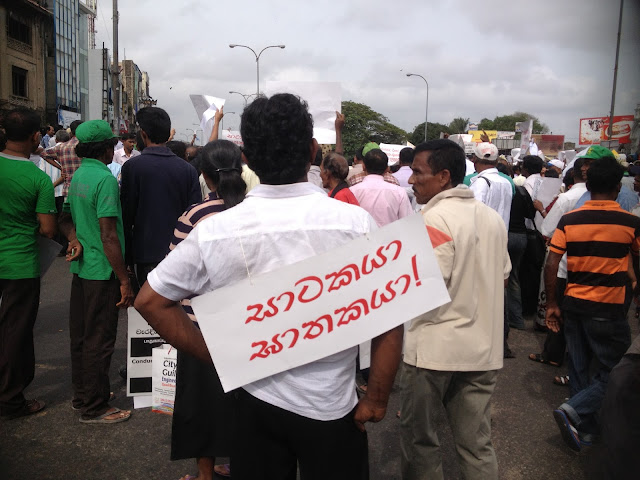 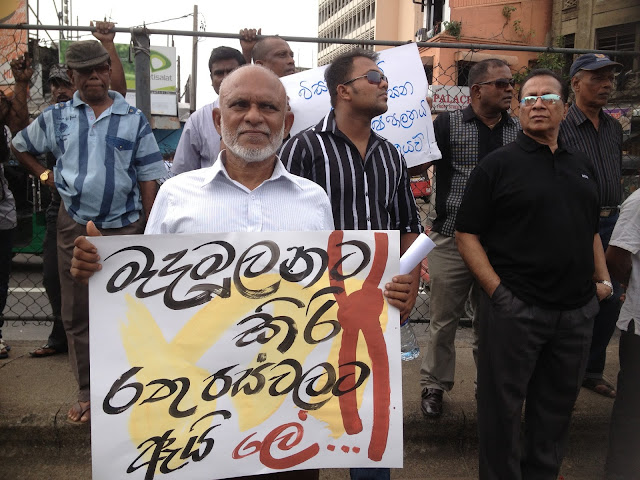 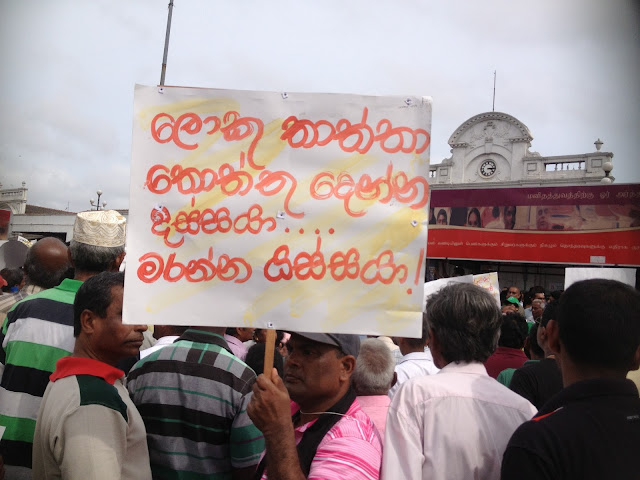 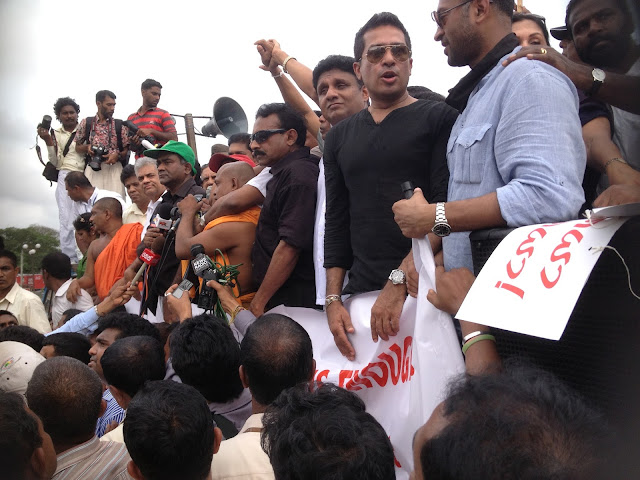 The little town of Weliweriya and the villagers who had been pleading with t he authorities for an effective solution to their grievance of clean drinking water received media attention on Thursday when they staged a demonstration blocking the Colombo- Kandy road at the Weliweriya town. The demonstration in Weliweriya took an unexpected turn when the military was brought in to disperse the protesting crowds.

T. Liyanage, a resident of Weliweriya who witnessed the entire skirmish that unravelled since the arrival of the military claims the entire town turned into a battle ground within a matter of a few seconds. “Once the military arrived, the Brigadier and the Lieutenant Colonel in charge of the troops met with the protesting monks and asked them to disperse. The monks informed them that they alone couldn’t make a decision and inquired from the protesting villagers whether they were willing to move; but they refused. Then the agreement was to discuss with several representatives of the group and arrive at a solution but before any decision was made, the military started advancing towards the protestors and pushing them away, yelling at the crowds in filth,” he said.
Blacked out and attacked

Liyanage said the clash turned worse by about 6.30 pm, “It turned into a complete battleground.” According to him as well as a few other villagers who witnessed the incident, all the street lights went off until the entire town was in darkness. “Then only the people were assaulted with poles and shots fired in the air. Subsequently, tear gas attacks were also used to subdue the agitated crowds that were running amok. Most people fled towards the church grounds and immediately the church bell was rung - its sound was echoing throughout the town,” Liyanage said. At this point, he had escaped into the shelter of the Weliweriya pola and had hidden inside it. “It was pitch-dark by this time but I heard continual gun shots and people screaming. Almost immediately, we heard shots being fired from near the church and people wailing and screaming for help from the church grounds,” he said. Bullet holes on the St. Anthony’s church walls
Church turns into a battleground?
The remnants of the reasons that caused those at the St. Anthony’s church grounds to wail could be seen yesterday mor ning. Although villagers claim that the pool of blood on the side of the church corridor was washed away by army personnel last morning, several blood-stained boot prints remained on the polished cement floor. Even within the church, dried blood stains could be seen amidst pools of water. The outer and inner walls as well as the stained glass windows of the church appeared as if they were part of a war-torn site – the morning sunlight streaming through the bullet holes in the stained glass and the church walls, damaged. Several leftover bullet shell casings were seen on the church grounds.
Several villagers on the site and the UNP MP John Amaratunga who visited Weliwariya together with Opposition Leader Ranil Wickramasinghe and Gampaha district MP Ruwan Wijewardena yesterday morning said the church priest was allegedly forced to kneel at gun-point and was assaulted by the military personnel who stormed into the church, demanding for those who fled into the church seeking safety, to be thrown out. They claimed that in the process, a young girl who had been inside the church was severely assaulted as well. “They even stormed into the nunnery and had held a gun at the nun and threatened her,” one of the villagers said.
The aggrieved villagers gathered at the church grounds yesterday morning and voiced their objection over the handling of protestors by the military. “I was at the protest when the clash occurred. People were talking about moving away from the road but before they could even decide the Army started firing. They fired shots everywhere and people panicked and most ran towards the church because they thought the Army wouldn’t come inside,” said W. Rukmani who had been among the protestors.
She expressed her repugnance at the manner in which the army allegedly assaulted even women after storming into the church. “They even hit women – it was terrible. The Army switched off the lights and began assaulting the demonstrators. When the clash subsided we came out to go home but my husband’s motorbike that was parked near the church was damaged,” she said.

Another protestor who was mourning yesterday at the church grounds – Chandrika, was very emotional about the untimely death that came upon the young schoolboy. She broke into tears outside the church while she recited the ordeal faced by the Weliweriya residents. “We did not demand part of the country; we were only asking for clean water and for six days we protested peacefully. We staged the demonstration only because we didn’t get any response from the responsible authorities. We asked for clean water and our pleas were responded with bullets and bloodshed,” she cried.
“They didn’t stop at assaulting the people but even violated the sacredness of this holy ground. We were unfortunate enough to witness this disgusting act. I might be arrested tomorrow but I’m not afraid to tell the truth because we would die anyway – either by the bullets fired by t he Army or by drinking the contaminated water,” she cried and strongly asserted that they no longer wanted any elections in the Weliweriya electorate.
Non-protestors caught in the clash
A resident of Galloluwa – a village located close to Weliweriya who wished to remain anonymous said there were many people and school children who were passing through the town that evening when they got caught in the midst of the clash. “I was returning home from work when I too got caught in the chaos. While I was fleeing towards safety from the shots that were being fired at the crowds I saw a lady, carrying an infant trip and fall. Before anyone could come to her rescue, she was assaulted. It was disgusting to watch it,” he said.
Dinesh Sanjeewa, a resident of Helenwatte confirmed the allegations that among those who were attacked and arrested were people who had not participated in the protest. “When the army started assaulting the villagers they did not pick and choose. It was a brutal attack launched on every single person they came across. But before the attacks began, they knocked off all the lights and crushed CCTV cameras that were fixed in various shops. The terror they inflicted was not limited to the town – they even chased people down by roads,” he says.
Sanjeewa, his tone angry and frustrated continued to lash out at the military and the manner in which they reacted towards the villagers. “Those who protested are all Sinhalese and this is how they treated us.”
The horrific incidents that occurred after the villagers’ protest will haunt our memories. It seems that it is only after innocent lives are lost to violence that those in power open their eyes and ears to grievances of the public – in this case, the basic human right of access to clean drinki n g water.


Government sources distressed at the turn of events suspect radical elements sponsored by an unseen foreign hand, wishing to bring this government to disrepute before the CHOGM, as well as set the stage for international pressure when the CHOGM commences.