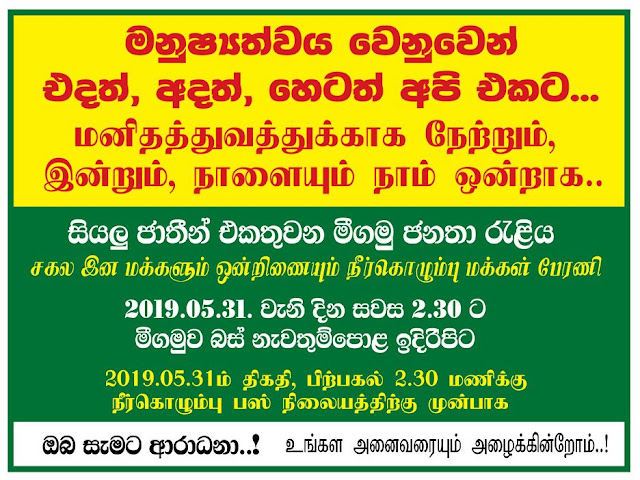 After the suicide attacks on 21/4. the divisions among the Sri Lankan ethnic groups have widened very seriously.  Negombo was one of the worst affected area where hundreds of Catholic devotees killed at the Easter Sunday mass. Amidst the serious attack, the people in Negombo were kept calm and patiente, which is admirable. The example of Negombo people set was reduced the violence in the country, at the post attack context. Unfortunately, it was 2 weeks after the 21/4 attack, some unfortunate incidents happened on 5th May with the gang attacked in some areas of Negombo.
The organized Negombo citizens were shocked with the attacks and approached Police and defense ministry for the prompt actions to protect innocent citizens. However, for long term reconciliation, we need to have people to people dialogue and build up trust among the communities, ethnic groups around the country. One of an accusation against the Muslim's is that they are not interact with the other ethnic groups. We can understand why they were attempted to isolate from the others and went in side their shells with the suspicion and pressure from the society. So, we the concern citizens in Negombo area attempt to extend the hands with solidarity and brother/sisterhood among the citizens.

As one of a step for peace and reconciliation, we the Unity of Negombo Citizens' is organizing a mass rally on 31st May at Negombo, at 2.30 pm under the theme of "Yesterday, Today and even Tomorrow, we are United for Humanity!"
We invite all the concern citizens, to join with us to say "We are united to build a Rainbow City in Negombo"
Share this article :
« Prev Post Next Post » Home