Home » » Statement on Violence Against Muslims by Women for Peace, Non-Violence and Equality

Statement on Violence Against Muslims by Women for Peace, Non-Violence and Equality

STATEMENT ON ANTI-MUSLIM VIOLENCE, MAY 2019

We are committed to justice, equality and meaningful peace in Sri Lanka. We write this in urgency, as anti-Muslim mob violence has erupted in several locations across the island, after 3 weeks of Easter Sunday Suicidal bomb attacks on 21st April.
Yesterday, [12th May] violence erupted in Chilaw, in the North Western Province, as a mosque and several Muslim-owned shops were attacked by a mob. Today,[13th May] we heard reports of similar violence across the North Western Province, in Kiniyama, Kottaramulla, Kuliyapitiya, Hettipola and other localities.
Many of us lived through Black July, in 1983, when anti-Tamil violence took hundreds of lives. We lived through a bitter civil war which claimed thousands more. We watched in fear and horror as anti-Muslim violence unfolded in 2014 in Aluthgama and last year, in Digana. We are still grieving for all those lives lost, those injured, and families broken due to the violence on 21st April, Easter Sunday.
We write this as an appeal to our collective humanity. We urge all Sri Lankan citizens to reflect deeply on one’s values, faith, religion, and humanity, and to resist violence at all costs. We urge our representatives to quell the violence immediately with unified political leadership, and commit to accountability and justice. We urge all communities to ensure we are not yet again set down the path to an unstoppable war.  There will be no meaning in mourning for more dead, nor will there be meaning in platitudes, in the aftermath. We will not be able to absolve ourselves or explain away our complicity. After everything we have experienced as a nation, if we cannot prevent another Black July, what would we have achieved?
We are holding all citizens, particularly those especially vulnerable, in our collective prayers. We must act against violence. We must learn from history.

I used to wonder about … those who stood and watched the killing:
does the memory of so many pleading eyes stab like lightning through their days and years
and do the voices
of orphaned children
weeping forlornly          before  dying haunt their nights?
Forty years later
once more there is burning the night sky bloodied, violent and abused

and I - though related
only by marriage -
feel myself both victim and   accused,
flinch at the thinnest curl  of smoke
shrink from the merest thought of fire
while some warm their hands at the flames.
(excerpts)
Anne Ranasinghe, July 1983, 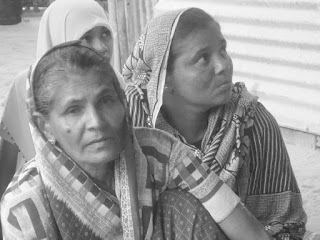 Women for Peace, Non-Violence and Equality