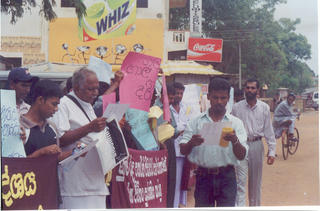 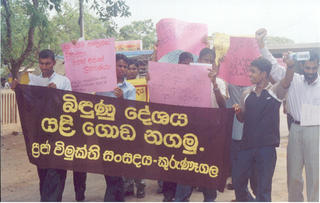 Place: In front of the Puttlam Bus Station
How many people have joined: About 250 people participated
From where the people have come: Kurunagala, Kalpitiya, Karuwalagaswewa, Mundalam, Barudalkola
The protest at Puttlam seemed to be very successful. It has started at 10.00 a.m. and ended at 11.45 a.m. At the beginning they have distributed the pamphlets and hand outs among the people and marched towards the D.S office. When they reached there were no offices in the office. Only one of the officers named, Mr. W.W.Ranaweera was there. Then they handed over the petition to him at 11.40 a.m. He has accepted all the irregularities that has happened and further happening. Further he said that if somebody is doing a corruption, that person has to be sent home
Share this article :
« Prev Post Next Post » Home