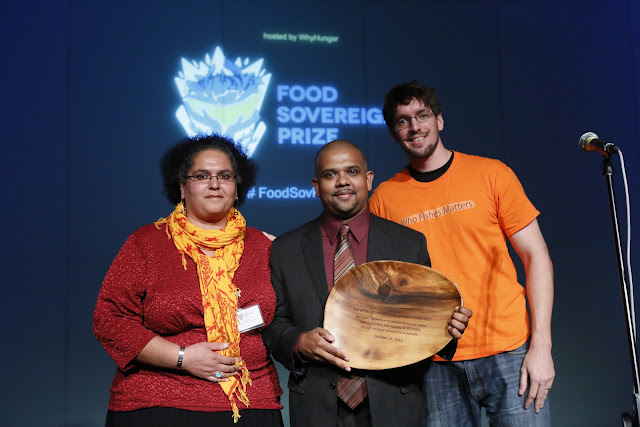 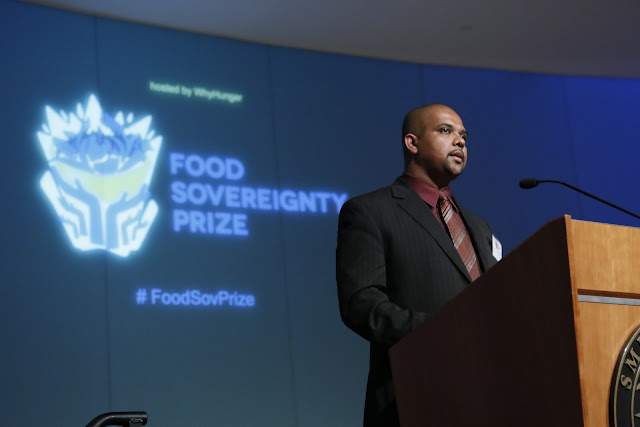 by Jake Olzen
The world’s leading agricultural and food policy experts are headed to Des Moines, Iowa, this week to celebrate the World Food Prize. The annual event heralds the achievements of individuals who have advanced human development by improving the quality, quantity or availability of food in the world. But not everyone finds such achievements reason to celebrate.

Occupy the World Food Prize — an ad hoc coalition of community groups and activists — has organized a week of educational events, panel discussions and direct action to protest the corporate control of local and global food systems. The goals of Occupy the World Food Prize‘s campaign are twofold: to use the World Food Prize event as an opportunity to redirect the public discourse around food and farming systems and to shift the focus of the prize away from agribusiness to locally-based, sustainable agriculture.

Activists have planned to vigil and “soapbox” outside of the World Food Prize three-day symposium to draw public attention to the corporate nature of the organization. Direct action and civil disobedience are planned for two separate occasions during the symposium. The first, on Wednesday, October 16, Occupy the World Food Prize will protest the Rockefeller Foundation’s endowment of the inaugural Norman Borlaug Award for Field Research and Application at the World Food Prize Hall of Laureates building.

Cordaro said that the reason for targeting the Rockefeller Foundation’s monetary support for the World Food Prize is to protest the dangerous ways foundations create the economic, political and social infrastructures of global corporatism.

The second action, on Thursday, October 17, will take place at the Iowa State Capitol where this year’s World Food Prize will be awarded to Dr. Daniel Hillel.

Established in 1985 by Nobel Laureate Dr. Norman E. Borlaug, the World Food Prize received considerable support in its early years, including seed money for the monetary award from the General Foods Corporation. The late John Ruan — a native Iowan, entrepreneur and builder of the Marriott Downtown Hotel where the World Food Prize events are hosted — established the current philanthropic fund where the prize money has come from more recently.

The October 17-19 conference’s participants are a veritable who’s who in the corporate food system that is dominated by large-scale industrial agribusiness, with guest-presenters including executives from Pepsi, Nestlé, Bayer, Monsanto and others. In 2008, Monsantodonated $5 million to the World Food Prize Foundation to ensure that the symposium would continue; a fact that critics of the prize point to as further proof of its corporate agenda for tackling serious issues such as global food security, biofuels production, hunger and nutrition.

“This World Food Prize is a scam,” said George Naylor, the former president of the National Family Farm Coalition and a farmer with more than 35 years of experience. Naylor — who just contributed a chapter to the new book “Food Movements Unite!” — will speak on an alternative panel in Des Moines during the World Food Prize about how corporate agriculture threatens the sustainable vision of family farm and peasant agriculture.

“The notion that [WFP] promotes is that the world’s food problem is shortage of food and that we need to produce more food to feed hungry people,” said Naylor when we spoke by phone. “Then they jump to corporate inputs — GMOs, pesticides, fertilizers and big processing companies — and it’s just totally wrong.”

The World Food Prize touts biotechnologies, such as genetic engineering, as crucial to stabilizing world food production. Borlaug, who is considered the “Father of the Green Revolution,” played a pioneering role in developing the dominant models currently used in conventional agriculture. The “Green Revolution” refers to the high-input, high-yield farming methods that were researched, developed and implemented in the mid-20th century.

Brian DeVore, editor of The Land Stewardship Letter, observes that critics of Bourlag note how the:

Green Revolution introduced an unsustainable system of food production to countries all over the world, a system that can’t succeed without ever-increasing amounts of chemicals and other expensive and ecologically harmful inputs.

Another outspoken critic of the World Food Prize is the indomitable eco-feminist philosopher Vandana Shiva. In her book “The Violence of the Green Revolution,” Shiva observes how corporate agribusiness undermined millennia of local farmer knowledge through the introduction of chemical-based fertilizers and pesticides that led to social breakdown in Punjab, India. In her book “Earth Democracy,” Shiva points to the chemical leak at the Bhopal pesticide plant that has killed more than 30,000 Indians as just one of the many tragic, but inevitable, consequences of the Green Revolution.

For Shiva, Occupy the World Food Prize and others, a just and sustainable food system is embodied in the idea of food sovereignty.

Food sovereignty’s basic premise is that all people have the right to decide what they eat and to ensure that food in their community is healthy and accessible for everyone. It also means farmers and growers having the right to choose to grow the crops and varieties they want, free from the volatile speculation of commodity financial markets. Food sovereignty is the alternative to corporate-controlled agriculture.

In addition to hosting an evening discussion to promote food sovereignty, Occupy the World Food Prize has organized two opportunities for people to meet with the Korean Women’s Peasant Association (KWPA) — the winner of the 2012 Food Sovereignty Prize.

The Food Sovereignty Prize stands in stark contrast to the corporate and government confluence of the the World Food Prize. This year’s honorees were awarded on October 10, in New York City at a public celebration. KWPA was recognized for promoting food sovereignty, women’s rights and the survival of small-scale South Korean farmers. As the grand prize winner, KWPA was awarded $5,000 — a far cry from the $250,000 attached to the World Food Prize.

The grassroots prize, developed four years ago by the Community Food Security Coalitionand WhyHunger, has honored community-based organizations that promote food sovereignty such as the Landless Workers Movement of Brazil, Family Farm Defenders and La Via Campesina, which coined the term “food sovereignty” in 1996.

Occupy the World Food Prize comes at a time when sustainable and alternative agriculture is growing as a movement but finding itself increasingly under attack.

On Election Day, California’s voters will decide on Proposition 37, which would require foods to be labeled if they contain genetically-engineered ingredients. In recent weeks, agribusiness interests have spent $36 million in hopes of defeating Prop 37 at the ballot box.

Also in California — often a testing ground for U.S. food policy — the now-debunked Stanford University study that claimed there was no significant difference between organic and conventional crops is another example of corporate influence in the academic research side of food systems. While mainstream media op-eds gobbled up that news, little attention has been paid to research and opinion that suggest organic agriculture can, in fact, feed the world. It is this kind of corporate bias that Occupy the World Food Prize intends to expose.
© 2012 Waging Nonviolence
Share this article :
« Prev Post Next Post » Home