Home » » Lankan fishermen ‘guarding my islands in the sun’

Lankan fishermen ‘guarding my islands in the sun’

By Sunimalee Dias
Allure of Kalpitiya: Is the much-hyped tourism project working?
View(s):
KALPITIYA – Goats, donkeys, men, women and school children roaming about freely in Kalpitiya, off Puttalam on Sri Lanka’s northwest coast, set the mood for a laid-back lifestyle with the newest addition being the construction of the road leading upto Palavi that is landscaped with coconut lands, and other plantations including the ocean and salterns on either side on the ride to the town.

At the Kalpitiya harbour
People here may seem rustic and innocent but no; these fishermen whose lives revolve around the church risk their lives on the high seas even with a knife to their necks at the hands of their Indian counterparts and now face an added risk of losing their homes at the hands of investors eyeing the islands for hotel construction.
In an essence it is aptly said in the song “Island in the sun”, this is an island in the sun where the people have toiled since time begun, they may sail on many a seas but the shores of Kalpitiya will always be home to them.
It was in 2010 that Sri Lanka Tourism attempted to kick start the Mahinda Chinthana-sponsored Kalpitiya tourism zone project but which got hampered mainly due to opposition from the local fishermen claiming that their livelihoods would be affected and due to pressure from private individuals claiming that the lands leased out were not state property but was private lands on the islands.
Having fought for their rights today interestingly, however, the fishermen have been able to create a fear psychosis among investors and delayed commencement of the project as a result of which it was believed by many there that the people must be the reason why investors were averse to start work or lease out lands on the islands.


With no clear indication of how many fishermen live on these islands, a rough estimate by the local authorities indicate that at least 800 of them were immigrants mainly from Negombo and would settle on these islands in a bid to catch fish and later migrate to Trincomalee for the next catch.
Local authorities also claim that it would be difficult to ascertain who the real fishermen are since some were immigrants and others were small time operators and still others were engaged both in fishing and other forms of activities for their livelihood.
Wither development


The sorry sight of these people add to the task of increasing development on these islands since local authorities were keen on getting adequate schools and teacher facilities for the school children on these islands in addition for the need for water and electricity. With a dearth of these facilities it was difficult to ascertain as to how these people would be involved in the entire development process.
Local officials said they have requested the authorities to assist in the process by providing an adequate number of teachers for these schools and provide them with an additional allowance for working in these difficult areas.

A hotel in Kalpitiya
People also state that they were unable to obtain proper water on the islands and that in most instances the island residents would dig a small well where they would get a small quantity of pure water after which it would be salty as a result they would have to close it up and dig another one and this pattern would continue, they stated.
On the other hand, the people were also in need of adequate healthcare facilities for which the human resources was wanting. In this regard, the local authorities had commenced mobile healthcare units however; this would also prove inadequate since there was a dearth of required number of staff.
Most fishermen claim tourism can take its own place in this area but they need to thrive as well and in this regard, today they have a broader outlook towards this concept.
Ippantivu Islands St. Sebastian Annawasala Fishermen’s Chairman M.K.M. Hughman Fernando said in an interview that though tourism was important they were however, not ready to give up their rights as fishermen.
On the other hand, they want their rights to be protected so that development for tourism and development of the area could occur alongside each other in addition to allowing the local fishermen to carry out their activities unhindered, he explained.Tourism in their lives
Talawila Parish Priest Fr. Pious Fernando also speaking with the Business Times echoed similar sentiments when he explained that these people need to be developed with the adequate knowledge and facilities and should be provided the right awareness after which they could be made to understand the importance of tourism. Fr. Pious Fernando
In this regard, it was evident that the people were able to today fathom out that development in terms of tourism would not hinder their progress but would be carried out side by side along with their own work and now they demand only for some space on the islands for them to live and carry out their activities.
But in this regard, the investors have faced a new roadblock since the fishermen have demanded space on the islands in which they too want to construct their own hotels. At a recently held meeting in Colombo with the tourism authorities, investors, fishermen and the church, all parties agreed to allocate 10 acres of land on Ippantivu island but the location was another problem since both parties want the same area.
Area observers however observe that this system would mean that the fishermen would be zoned into areas on the island but without proper ownership it would be difficult to ascertain who would be allowed on these islands especially since immigrant fishermen would also be travelling to these areas. Moreover, a number of unanswered questions remained as to how the next generations could claim ownership on these lands and in this regard, it was pointed out that proper regulation would be required. 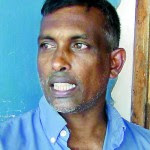 Hughman Fernando
Mr. Hughman Fernando believes that only fishermen should be provided lands on these islands but it would be interesting to find out what would happen to the next generations that would not be involved in the fishing industry and where they would be set up or live in the future since they do not have clear titles or ownership to these areas.
Similarly, 140 acres has been allocated for fishermen on the Uchchamunai island that has approximately 1500 acres, but they had not reached agreement on how these lands would be zoned out to the fishermen, Holy Cross Church Kalpitiya Parish Priest Fr. Michael Fernando also present at the (Colombo) meeting said in a telephone interview with the Business Times.
He noted that the government and investors had agreed to amicably settle the issues raised by the fishermen in terms of non-relocation and acceptance of these people and their fishing activities on these islands.
However, Fr. Fernando observed that the system was very slow and in this regard reaching a final solution to these issues would always take time.
“What I am seeing is that if this area can be developed with tourism, through that development our people’s livelihoods also should be developed – that means we are not destroying our area – if the government wants to develop this area they can develop our people as well,” Fr. Fernando explained.
Church authorities have been informed that concepts similar to the Maldivian idea was mooted for the development of the project on these island, however, though it was clear that they were not clearly aware of this they still would oppose it since they believe it would create a cultural setback.
In the Maldives the concept of island tourism means that the locals would travel to these islands only for work purposes from the mainland however, this would not happen here.
“At the moment what we are saying is that if the government wants to launch the programme then do justice to the people,” Fr. Fernando said.
Kalpitiya residents serving in hotels
With the changing landscape and pattern of life, the residents have already been employed in nearby hotels established by Sri Lankans. In this regard, the fishermen are not averse to their locals joining the tourism industry. 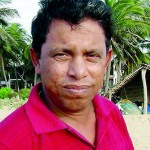