Say no to Mahinda

Civil Society groups lead by the trade unions gathered at Colombo today say No to Mahinda again. The aspirations of 6.2 million people were to Mahinda go home at the Presidential Election 2015 and was able to made it.
When it come to the General election 2015 power mongering Mahinda kept trying to get the nominations from SLFP or UPFA which President Maitripala Sirisena says NO to Mahinda at the begining.
While the Civil Society groups protesting at Fort station, a news alert was received saying "UPFA has decided to give nomination to former President Mahinda Rajapaksa to contest at the upcoming General Election in August, Gen Secretary UPFA."
The situation has changed the whole campaign aiming at President Maitripala Sirisena as the biggest betrayer in the Sri Lankan history. Gamini Viyangoda, a writer said, "Mr. Maitripala you cannot say you dont know this decision. We know when and where you take this decision. You and Mahinda did this conspiracy last week. You can not take such decision betraying 48 civil society organizations work with you."
Saman Rathnapriya, trade union leader said, "This is good that the line is clear. Ths thieves are in one side and we all are in other side. However, Mahinda could not win the Presidential election with all the wealth and power. And with out those Mahinda can not win again."
Brito Fernando, Convener, Veediye Virodaya said, "During the Presidential election we said Mahinda can not be elected third time. We will not be allowed him to win again. Now we say again Mahinda and Maitri both of you can not be won again." 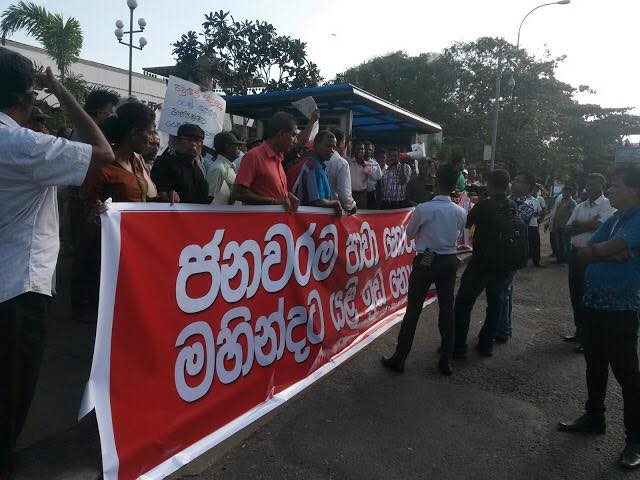