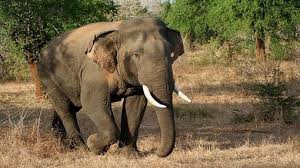 For about 6 years government trying to build an elephant corridor crossing human settlements to bring the wild elephant to Hakwatunawa reservoir aiming to build tourist attraction spot using elephants and reservoir. Due to firm resistance from Irudeniyaya farmer communities who are directly affecting by  allowing the elephants to walk through the area.
There are about 32 villages around the Hakwatunawa reservoir and majority of them are farmers. for last few years, the human-elephant conflict has many lives as well as wild elephants.


About 1500 people from Irudeniyaya and surrounding villages of Hakwatunawa conducted a protest on 19th of August demanding on stop the project and consider the alternative instead of risking human and wildlife.

According to some information, the protest conducted on 30th August  has backed by high-ranking politicians as well as relevant department officials. at the later stage of the protest, Coordinating secretary of Gamini Jayawicrama Perera (minister for wildlife),  Divisional Secretary of Polpithigama, Mr. W.G.W. Wanasighe and his secretary has entered into the scene and ensured them, that the project is going to be implemented accordingly the plan.