Home » » Fisheries Minister Too busy to Talk to fishers

Fisheries Minister Too busy to Talk to fishers

As the fishing season starts in South and west coasts of Sri Lanka, destructive fishing activities are on the rise in southern coastal areas.

On the Public day for government officials, a Fisher group attached to Southern Fisheries Organization - gall,  travelled to Colombo, hoping to meet the fisheries minister and conduct a discussion on the situation.

After hours of waiting in the ministry till the fisheries minister comes, after he arrives in the evening, he has directed them to his secretary as he is too busy to discuss the matters with fishers.

"Secretary was there since the morning if we want to discuss with him we could have done it as soon as we arrived at the ministry in the morning. We waited till evening to see and discuss the matter with the minister as it is very important to all of the small-scale fishers"   a fisher group member said.

Destructive fishing was in control during the previous government and now its look they have some agreement with some authorities to run the business. 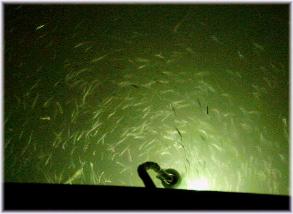