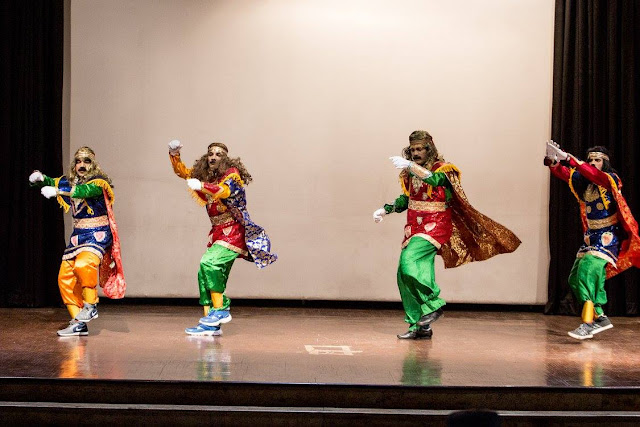 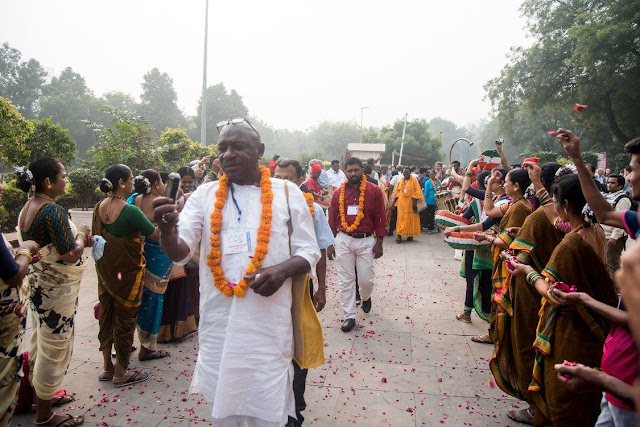 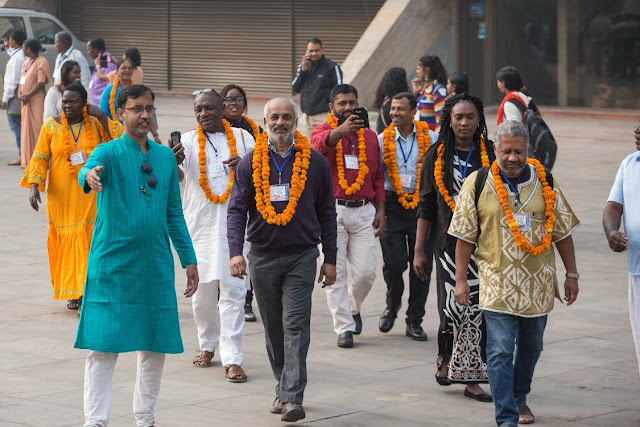 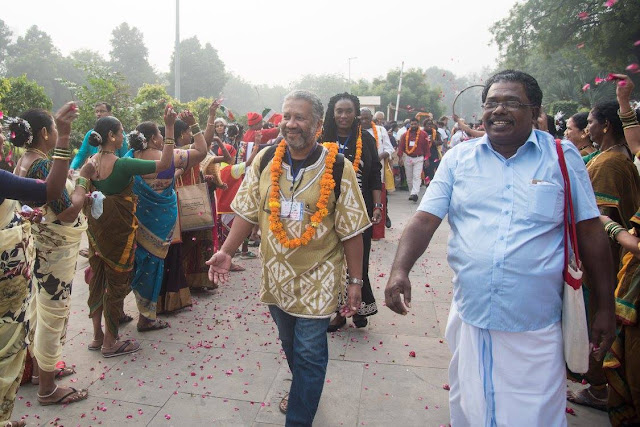 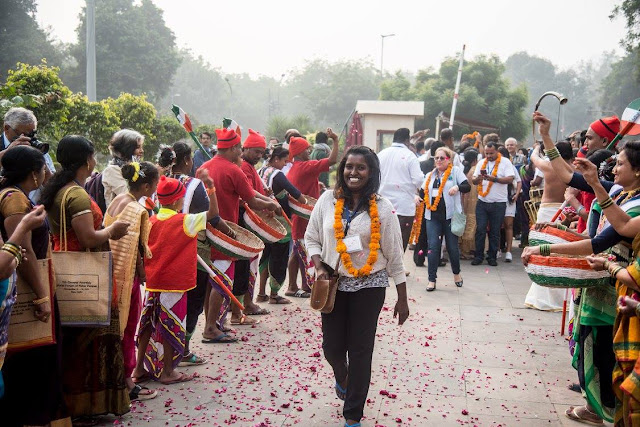 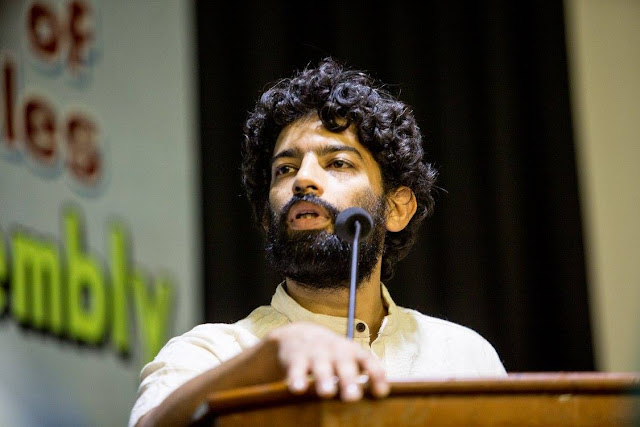 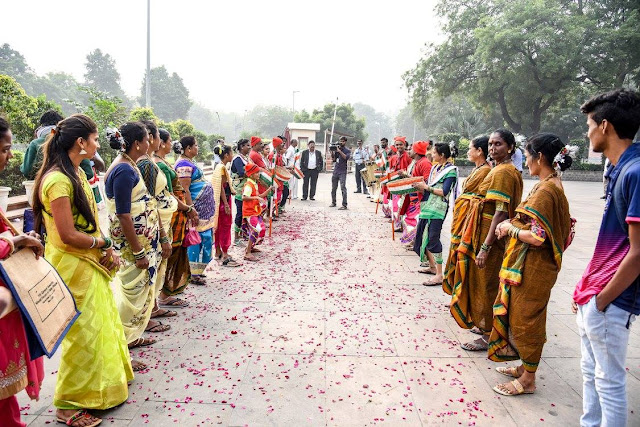 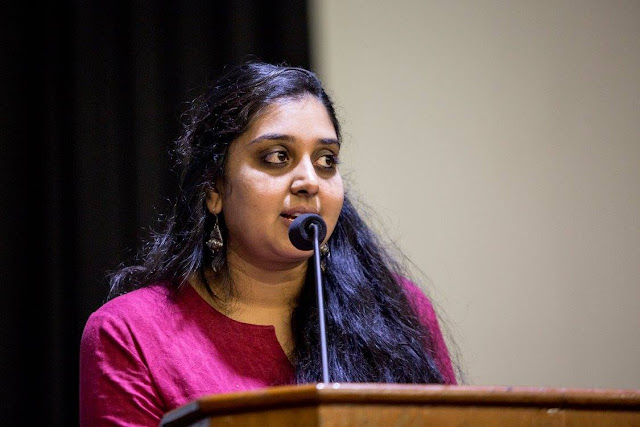 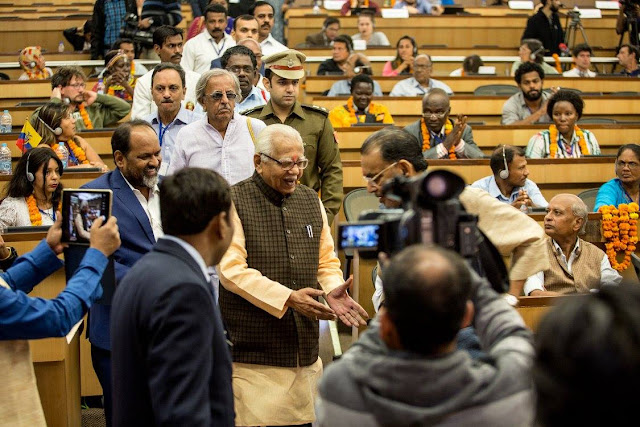 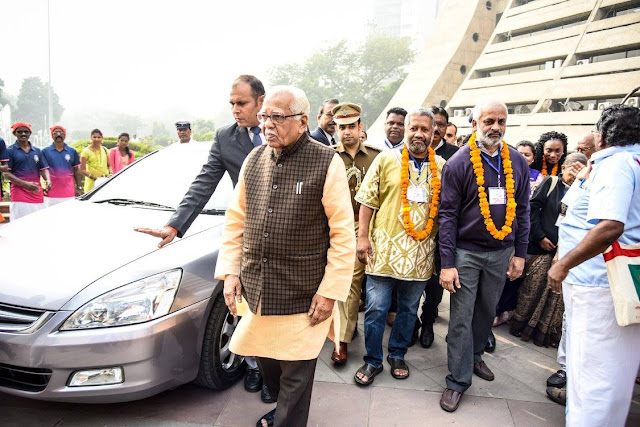 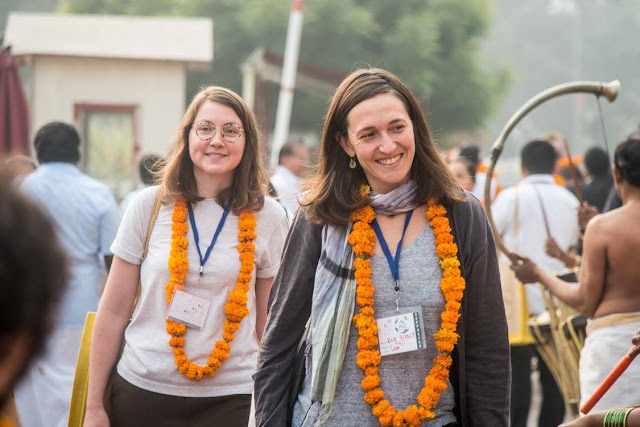 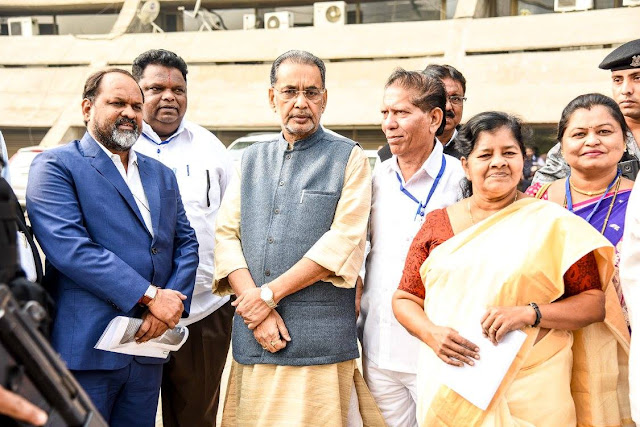 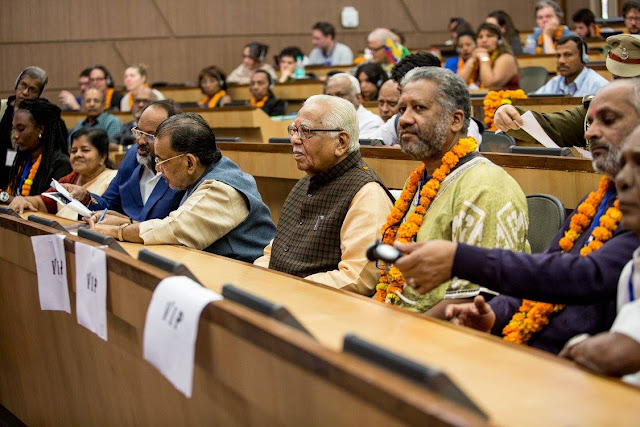 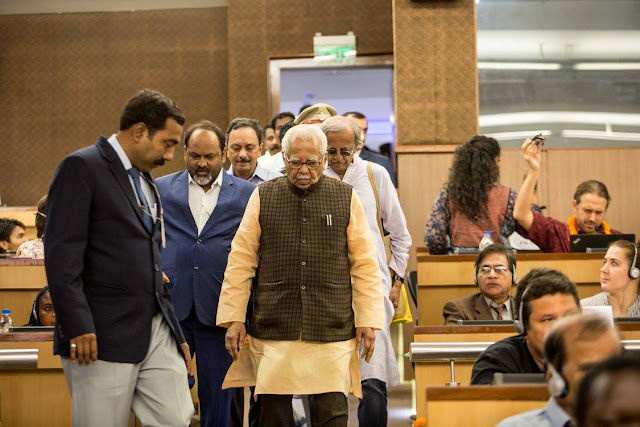 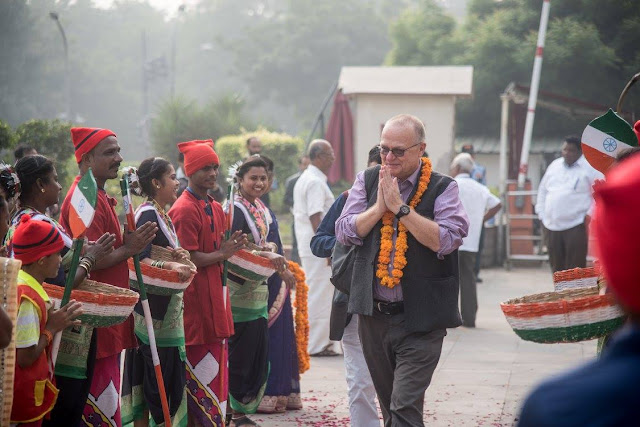 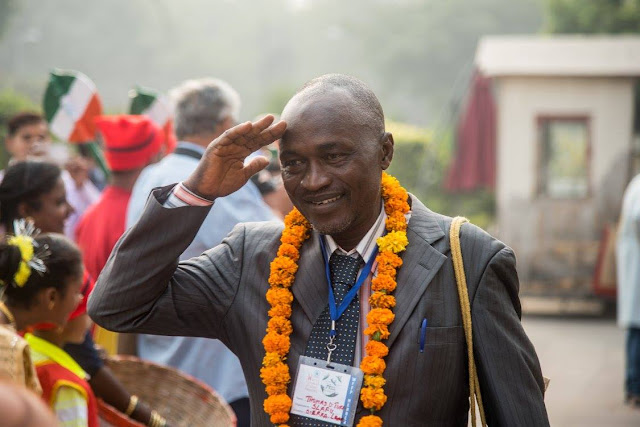 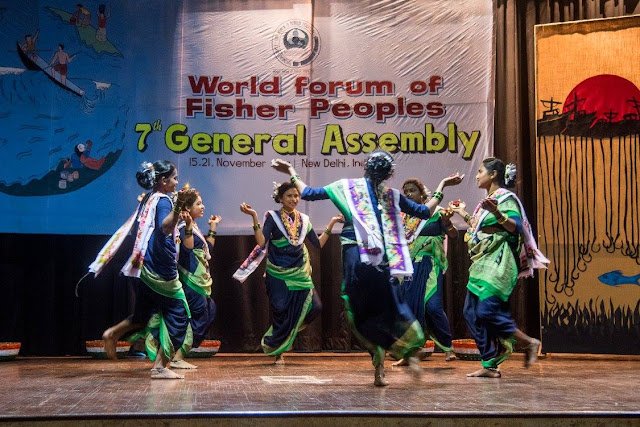 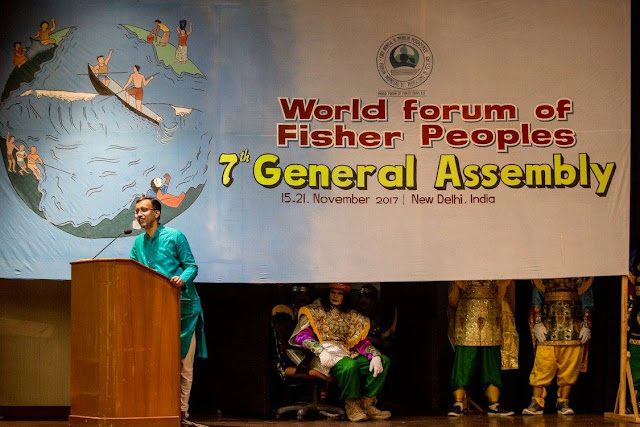 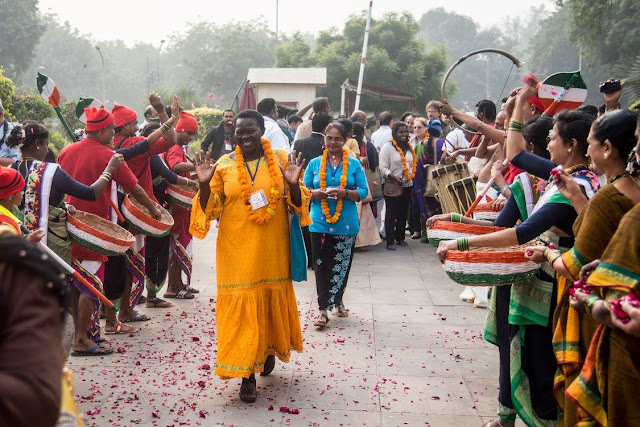 Inaugurating the 7th General Assembly of World Forum of Fisher People (WFFPGA-7) Ram Naik (Uttar Pradesh Governor) stressed the need to form international alliances to ensure the human rights of fishworkers who are incarcerated in neighbouring prisons; as Indian fishworkers experience in the case of Sri Lanka and Pakistan. He spoke about his close relation to the fishing community and how the government is committed for the benefit of the community through its various schemes. He also warned that in the times of acute human-induced environmental crisis, fish workers and other natural resource-based communities are soon to be climate refugees. He also congratulated the WFFP GA-7 delegates for this imitative and also hoped that it would come up with concrete solutions to impact our
collective future.

The keynote address was delivered by Radhamohan Singh (Minister of Agriculture) and dignitaries such as Alphonse Kannanthanam (Minister for Tourism), Sitaram Yechury (CPIM, Gen. Sec), Sudhakar Reddy (CPI, Gen. Sec), Mahedev Jankar (Minister of Fisheries, Maharashtra), Mercikutty Amma (Minister of Fisheries, Kerala), Naseegh Jaffer (Gen. Sec, WFFP, South Africa) and T Peter (Gen. Sec, NFF, India) addressed the gathering. They inaugurated the event by unfurling the WFFP GA-7 flag on 15th November at NDMC, Delhi.
Min. Radhamohan stated how the Blue Economy, a scheme by the present government, backed by our Prime Minister will ensure sustainable livelihood and economic prosperity to the fishing community. In response, the NFF welcomed the comments from the ministers and said that while they appreciated these schemes, the government should also take input from the communities before initiating such programmes. T Peter reiterated the need for the fishing community to have a separate ministry of fisheries at the central level.
The two-state fisheries ministers, Mercikutty Amma and Mahadev Jankar stressed upon the collapse of fish stock and expressed great faith in new technology as the way to enable food security to the traditional fishing community. Sitaram Yechury and Sudhakar Reddy extended solidarity to the resistance actions of NFF and appealed that the government should ensure that a development project like Sagarmala doesn’t destroy the lives and livelihood of traditional natural resource-based communities.
At the inaugural session, the NFF and WFFP leaders declared the key concerns of WFFP GA-7, a weeklong programme from November 15-21, 2017 which will focus on issues faced by fisher people today such as Food Sovereignty and Agro-Ecology; Inland Fisheries; and the FAO International small-scale fishery guidelines. The inaugural function was attended by delegates from around 42 member countries, and people from 9 coastal states of India who would strategize actions and way forward for the fisher peoples’ movement globally.
Naseegh Jaffer in his General Assembly report presentation mentioned that several
organizations need to come together and remind each other of our role in making the
movement of people, group and countries stronger.


Four studies by The Research Collective on marine and forest issues were released at the WFFP GA-7: Visible Tiger; Invisible People: Study and Report Based on the Public Hearing Held at Sundarban Islands, India; The Vizhinjam Port: Dream or Disaster: A Case Study of the Economic, Environment and Social Impacts; Where Have the Fish Gone?: The Impact of Industrial Development on Fishworkers in Gujarat and Occupation of the Coast: Blue Economy in India; along with the Ocean Atlas by HBF.
The screening of the theme song of WFFP GA-7 which reiterates its motto, “We are the Ocean; We are the People” and a tribute video on the lives and contributions of WFFP and NFF leaders were also screened. There were cultural performances by groups from Kerala (Chavittunadakam) and Maharashtra (Koli Dance). Leo Coloco (NFF, Maharastra) delivered the vote of thanks.
WFFP, the fisher’s movement representing around 10 million fisher people worldwide has taken the strategic decision to take a leading role in resisting land, water and ocean grabbing; the necessity of bringing in young and women leadership forward and linkages with transnational social movements and local organisations.
Share this article :
« Prev Post Next Post » Home