Home » » Don't put the lives in danger: Prevent the deportation of the refugees !

Don't put the lives in danger: Prevent the deportation of the refugees ! 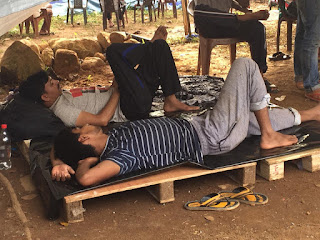 The 15 persons among the Refugees/ Asylum seekers living in Ahmadia mosque in Periyamulla have been serious issue today evening.
In Ahmadia mosque there are 326 persons including children are staying with the protection of the mosque people. However, today evening, the officials from Immigration have approached the mosque and found 15 persons lack of visa as they were expired already. Now, situation become worse, if those 15 persons deported without caring the situation in the country.
However, the only possibility is to approach minister Vajira Abeywardene for the prevent deportation. However, last May 1st. once Herman Kumara of NAFSO raised this question from the Prime Minister, said we will take all the measures to send those refugees to a third country asap. But, now it seems those who do not have visa send them back to the country of origin which is dangerous for many of the refugees as they have exiled from their country with some issues within their countries and need some protection from their own government.
So, we urge authorities to retain the refugees and prevent send them back to their countries of origin.
Share this article :
« Prev Post Next Post » Home