Home » » "We are the Youth to take the Lead in this country today, and Not tomorrow"

"We are the Youth to take the Lead in this country today, and Not tomorrow"

Mihimawage Daruwo, the Youth Group at Praja Sahayogitha Sansadaya at Polpithigama which is member of Youth Movement for Environment & Social Change(YMESOC) had conducted their monthly meeting today at Polpithigama.
Reconciliation, current crisis in the country and role of youth were among others in the agenda.
It is important Youth come forward and reflect the root causes of the extremism, terrorism and Islamicphobia in the country as youth should lead the country today, NOT tomorrow.
Ajith Rupasinghe, the patron of Mihimawage Daruwo Youth Group shares, “We need to reflect the current situation why those extremist groups became such racial and how the violence erupted.”
One of the way is to integrate Sinhala- Tamil - Muslim communities together and allow them to dialogue each other to heal the wounds.” Added Ajith at the meeting.
Chanaka, the Chairperson of YMESOC, said "We need to elect right persons to attend the training programs on Ecological Agriculture which helps to cooling down the mother earth and helps to respond positively on climate change, global warming crisis in the world today." 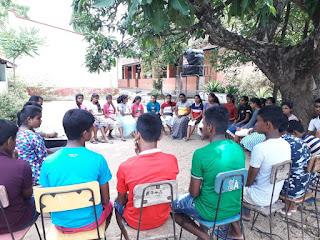