The background of the fisheries industry of Sri Lanka

Sri Lankan fishermen and other citizens of the country are fortunate to have their country is being placed in the Indian Ocean where world’s highest economic value fisheries resources are abundant and they too blessed with many inland fresh water resources. The fishing industry of Sri Lanka has a long history. It is mentioned that the original Sri Lankan’s had their settlements closer to the ocean, river deltas, lagoons and other fresh water lakes. Hence many of them were employed in fishery. Even today many Sri Lankans who are traditionally fishermen and they have their settlements closer to ocean, lagoon and other fresh water reservoirs. Those early Sri Lankans first started fishing in inland fresh water lakes, rivers and in lagoons. Later on they had their fishing crafts developed for fishing in the sea.

After some time with the development of social contacts with South India, fishing industry was developed into a large economic sector where many people had engaged as their source of livelihood. The fishing industry also took shape as salt water, brackish water, and fresh water fishery. With the expansion of the industry the traditions or the rules of the trade was introduced and every body honored these traditions.

The traditional fisheries industry had another phase after the independence of the country from British colonization. After independence era the industry had a trend for modernization with the government policy to do so. As a result many traditions pertaining to the fishery industry have been changing and modern technology has emerged above the traditional fishery methods. In such a situation it is precautionary for the fishermen to identify their fishing rights. Specifically with regards to the marine fishery it is safer to do so.
Within the EEZ of Sri Lanka 12 nautical miles from the coast is considered as the territorial waters and the next 12 nautical miles adjoining to the territorial waters is named as contiguous zone.
The balance of 200 nautical miles is named as exclusive economic zone(EEZ). The length of the coastal belt is 1585 Km and the continental shelf is about 30,000 Sq. Km. The area of EEZ is 517,000 Sq. Km.

On land, coastal belt is about 24% of the countries land area where 34% of the total population of the country is living. 60% of the countries total annual fish production is contributed from the coastal fishery. There are also 260,000 ha. of inland fresh water reservoirs such as canals, rivers, streams, lakes and reservoirs.

All type of fish, shrimp, crabs, sea cucumber and other crustaceans belongs to the above category. The non-living resources are the mineral resources in the ocean. The sea-coast, marshy lands and mangroves are natural resources which is vital for the dependability of the fisheries economy. These environmental resources also prevent the sea erosion. Unfortunately today the mangroves and marshy lands are destroyed large scale by human activities.

The total value of national fish production is estimated as US$ 100 million. It contributes 2.7% of the gross national production (GNP) of the national economy.

There are 15 fishing harbors, 19 anchorage points and 600 landing points as infra structure facilities of fishery industry. There are also 60 ice plants and 06 boat manufacture yards registered in the country. 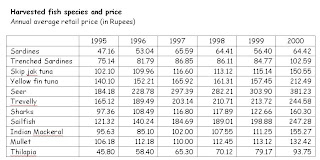 Whichever the prices mentioned above so far there is no system available for fish distribution where the consumer would get a fair price. It is very unfortunate that the Ceylon fisheries corporation(CFC) which was established with the intention to safeguard the consumer as well as small fishermen, haven’t served the both these expectations.

Although the Ceylon Fisheries Corporation(CFC) has the capacity to help consumers and fisherman in this respect the active participation has been minimum. For an example the fisheries corporation has purchased less than 2% (1.7%) of the total fish production of the year 2000. Although the above statistics are based on fisheries senses of the MOFORD, a systematic study on North and East fisheries should be conducted.

In preparation of a sustainable fishing industry North east cannot be neglected. North and East consist 2/3 of the countries coastal belt hence the number of people employed in fisheries industry is fairly large in this area. Therefore it is very important to make a proper assessment on the situation of the fishermen in this region. We have paid special attention to these provinces in preparation of a sustainable fishing policy for the industry. 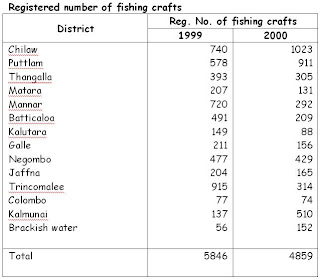 It is mandatory to register all the fishing craft based on the type of the craft and the type of fishing gear used, according to the fisheries act no. 2 of 1996. But the above statistical figures shows that only 20% of the actual number is registered. The intention of the above act was to introduce a systematic management of fisheries resources, the lack of awareness of craft users and the administrative system which command from top to bottom has failed to reach the objectives. It is utmost importance to conduct awareness programs among fish workers to make them understand the value of managed fishery resources and volunteer them to register their fishing gear. But any sort of control system should not bar the fishermen from their rights.
Home