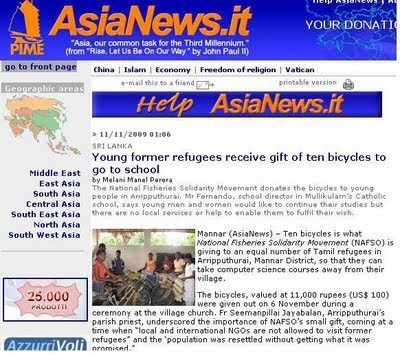 The National Fisheries Solidarity Movement donates the bicycles to young people in Arripputhurai. Mr Fernando, school director in Mullikulam’s Catholic school, says young men and women would like to continue their studies but there are no local services or help to enable them to fulfil their wish.
Mannar (AsiaNews) – Ten bicycles is what National Fisheries Solidarity Movement (NAFSO) is giving to an equal number of Tamil refugees in Arripputhurai, Mannar District, so that they can take computer science courses away from their village.
The bicycles, valued at 11,000 rupees (US$ 100) were given out on 6 November during a
eremony at the village church. Fr Seemanpillai Jayabalan, Arripputhurai’s parish priest, underscored the importance of NAFSO’s small gift, coming at a time when “local and international NGOs are not allowed to visit former refugees” and the ‘population was resettled without getting what it was promised.”

The connection between the fisher association and village residents goes back a long way. A year ago, when residents were still living as refugees in Nanattan Division, NAFSO helped them by donating boats, engines, nets and fishing gears (see Melani Manel Perera, “Aid for northern fishermen who fled the war between Tamil Tigers and the army,” in AsiaNews, 12 January 2009). Now they are getting ten bicycles.
“It is a golden opportunity,” said 21-year-old Amala Devikala, one of the recipients, “because it twill make easier to go to class and we will not have to walk for miles through the jungle, sometimes encountering elephants.”
For S. Irudeyaraj, 27-year-old Tamil who recently graduated, NAFSO’s gift will help him gain a much-desired sense of normalcy. “We have been through a long period of pain, under pressure, but now we want to live like others in a just society with equal rights and the same opportunity for prosperity,” he said.
The handing over the ten bicycles provided an opportunity to highlight the difficult situation many young people are still experiencing in the former war zone.
Devabalan Fernando, director of the Catholic school in Mullikulam said, “Many young people, with degrees from technical schools or university, are still looking for a job but cannot find any because of the political situation.”
Even the younger ones are paying for the region’s instability.
“Many young people would like to continue their education in the field of their choice, but there are no services or help to enable them to fulfil their wish.”
S. P. Soosaithasan, a Tamil Catholic and a former MP for Manar, said he hoped that NAFSO’s gift would help young people in Arripputhurai build a future.
Speaking at the ceremony, he urged young people “not to accept poverty” as “a barrier,” but have the courage instead “to try hard to reach your goals” because that is “what you and the country need.”
News Source:AsiaNews.it
Share this article :
« Prev Post Next Post » Home