In 2006 about 900 families were displaced from Sampur area, Nawarathnepuram and Kunathive of Muthur DS division due to war. From June 2006 they altogether lived in Kattaparichchan (KP) displaced camp until 2013 April.
According to the information received from the people, after redusing the HSZ cover,  respectively in 18.04. 2013 and 21.04.2013,  132 families resettled in Nawarathnapuram and 89 Families were resettled in Kunathive  from kattaparichchan camp. Both places were the original pleases of the families resettled.

What has happened to the other families in Kattaparichchan camp? and where they from?


411 families still live in the same camp without any official record. according to the people still in camp, in official records says that,  these families living with relatives in some other areas. Government showing that there are no more people to resettle.
According to the information provided by Muthur DS  to ZOA (a NGO working with war affected people) "Families from 4 GN divisions = Sampoor West (448F), Sampoor East (355F), Kadatkaraichchenai (113F), Sambookalli  (?) are still not able to resettle in their original places. The Government is proposing relocations in Koonitheevu and Navaretnapuram for 483 Families from these remaining 916 (283F + 168F + 32F respectively). Other locations have been suggested by GoSL for the remainder. On a more positive note, there have also been reports that plans are being made to return a further 400 to 500 families to parts of Sampoor East and West, Sambookalli, and Kooneetheevu North, but this is not yet confirmed.There are still 3 IDP camps functioning in Muthur division; Kiliveddi,  Manachchenai  and Paddiyadithidal camp"

These families were lived in Sampoor area before the displacement.after the end of war about 800 acres were taken over by government and maintain as HSZ hoping to build coal power plant with Indian investment.
Families still living in KP. camp asking the original lands they lived in before displacement. But authorities not listening to them.
According to these people still in displaced camp, funniest things happening when foreign diplomatic visitors reach to north and east to study the resettlement progress.

before in such diplomatic visit, In Muthur, A team (representing government) has reached to the camp and asked to draw a banner in Tamil, to a man, saying that, " THANKS TO THE PRESIDENT AND THE GOVERNMENT FOR RESETTLING US IN OUR ORIGINAL VILLAGES OF NAWANETHAPURAM, KUNATHIVE, AND SAMPOOR"
Since the Sampoor people not resettled yet, man who draw the banner have change the words as "Thanks for the precident and the government for resettling people, their original villages of Nawanethapuram and Kunathive, please take steps to resettle Sampoor displaced people too"
So, the banner is not according to the order, Sampoor people, in KP camp had no any chance to meet foreign diplomats. for them, another team (from the government it self), with makeup have participate to the meeting and show the gratitude to the government. 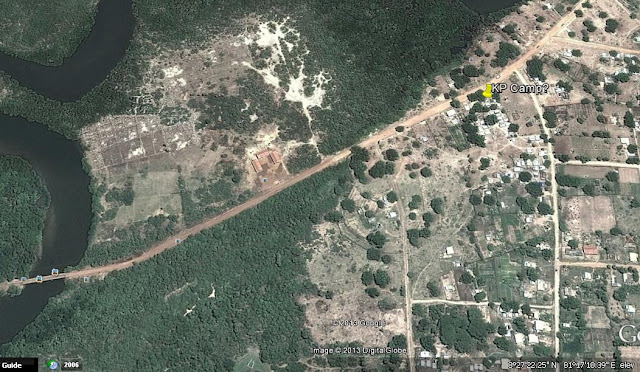 For these people, only allowed to do their fisheries job to conduct in Villu kulam (Villu Tank) even that, only up to 40 families. about 15 fishers conducting filter net fishery near by waters and 3 beach seine nets are operating. since no records on them, they are not receiving any government assistance as displaced people.

there are about 800 youth and children ages less than 18 years, some studying in near by temporary school.