300 Days to the Tsunami Disaster 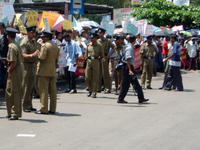 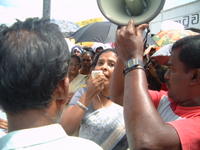 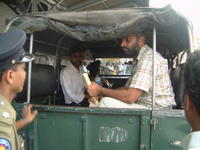 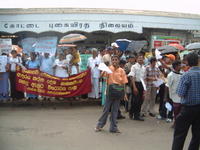 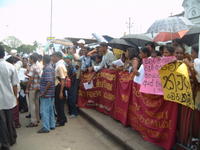 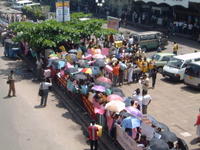 To the 24th October 2005, all countries who faced tsunami disaster have commemorated painful 300 days from the 26th December 2004. Although it has passed nearly ten months, the created problems by the disaster still alive. The people who should responsible for bring back the people’s lives that suffered, added more difficulties by introducing more cumbersome laws and regulations.
By introducing 100m-200m buffer zone, the Sri Lankan government artificially displaced the people, while there is no lands to give them to rebuild there houses, thousands of peoples still in the temporary huts, and the money received from various countries as aids still in unused/misused or just disappeared. Recently released report of the auditor general is evidence for that.

The fisheries community of Sri Lanka (and India) now facing added difficulty by the Indian government by introducing Sethu Samudrem project in northern sea of Sri Lanka, while illegal fishing methods ruling the other parts of Sri Lankan waters. Most of these issues are must resolved and interfered by the government as soon as possible.

But as usual the government wait in still condition by showing “all problems have settle down and we are the people who first to over come all the problems”.
As we having years of experiences whether it passed 24 months to the disaster, without enforcement of the Victims the authorities will never solve problems.
Thousands of people from all over the affected areas and representatives of fisheries sector, agriculture, industrial labors from all over the country including North and East gathered in front to the Colombo railway station and protests for two hours to win their rights.

The protests based on following reasons.

01- Tsunami victims still in improper environment whether it has passed 300 days.
02- The 100meter and 200 meter buffer zone have displaced people again
03- Destructive fishing gears and techniques are threat to the sustainability of the fishery.
04- Sethu Samdram project is a disaster for Sri Lankan and Indian Fisheries sector and aquatic environment of the Indian ocean .

The government suddenly responds with arresting two leaders under the presidential election law and state of emergency including Mr. Herman Kumara the convener of the National Fisheries Solidarity. they were released after three ours of questioning.

It was obvious that the government trying to remove the people from the place by hook or by crook. What ever the situation protestors stand still until their tusk is done. After hot two hours of action peoples scattered peacefully.
There is a hope of attention of all leaders of all political parties because present time is filled with election campaigns.
Until get done the work, will never fail the strength of all innocent victims, the dedication of all the people will never end until do the justification to the last person who waiting for win his rights.