‘LET’S JOIN THE STRUGGLE FOR WATER’

On August 01st the State Army took the lives of three youngsters who voiced for their right for water. There were many others who got injured in this clash and hospitalized. Lack of water was the protest of those people from twenty five villages including those from the village of Rathupaswala. The Government Army used brutal force to suppress the peoples protest.
We met people from Rathupaswala village who spoke of the current situation and its many causes. 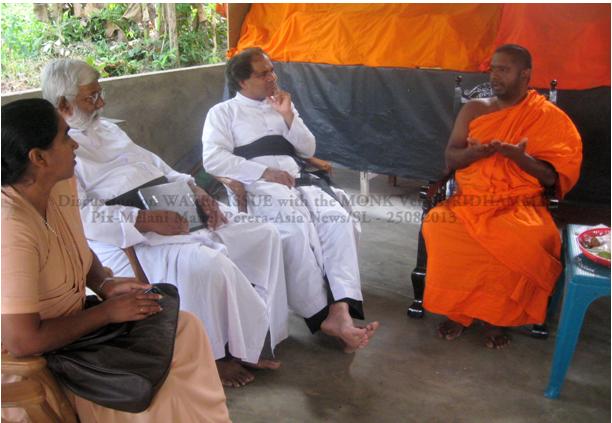 “All this started in 1992. We saw this disaster at that time. We complained to the authorities and made them aware of the situation. I filed a case. The Environmental Authority was adamant to keep silent. It was proved at the case that the water is unclean and cannot be used, however, everything turned to our disadvantage. I have four acres of paddy. I couldn’t get into the field. My legs got affected by this dirty water. Those who go to the field, died there itself. The story went that it is Mee Una (leptospirosis). Seventeen died and ten became blind. Many others fell ill. Once we bathe we feel faintish and have to sleep. This state did not change. It continued. Once you drink water, your whole body gets totally dry. So we drink more water. Our children complain that they have chest pains. Children go to school with a digene tablet in their hand. We are almost dead now. See my fingers. 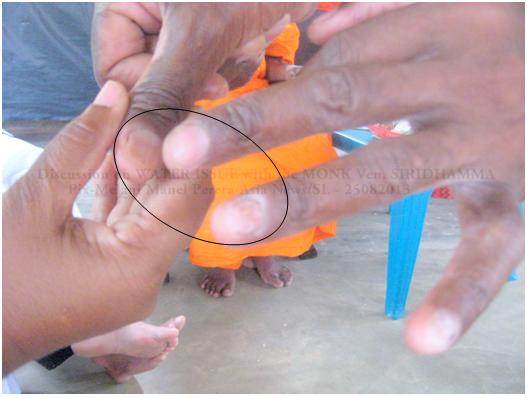 The finger nails have fallen. Many people suffer in this way. There’s enormous damage that has happened inside our bodies. But we want to save our children”.


“We haven’t got any solution yet. We will fight till a solution is met. It is so impractical the way they lay pipelines. It is only for the four major towns that they have given pipelines. There are twenty five villages when you come inside.  To lay pipelines for those towns they took one month. To give this service to the villages, they will take ages! Enough is enough. We don’t need to pay and get water. We have wells which are older than hundred years.”
Another farmer revealed the following:
“The factory takes water from the springs that give water to the fields. Some of the villagers are supporting that. They get paid for it. We know that some get 50,000 to 60,000 rupees. In one village there are nearly 500 to 1000 families. Only 400 water tanks have been supplied to all the villages. Even the water they provide is not drinkable. Also the quantity of water they supply is insufficient. To don’t wash, we soak a piece of cloth in water and wipe our bodies. Why do we need to suffer like this? We had enough water and we drank enough. These officers, it is they who deprived us of our water. The Sri Lanka Government and those responsible acted as if they are deaf and blind. Next they attacked our people. They killed two school going children and one youth. Why do they treat us like this?”
These stories were very emotional and there were many of them. They were sad for what has happened. We asked them who would take the leadership in this struggle. They said, “all of us are leaders. This not only a common problem, water is our life. So this struggle is between life and death. We need to sacrifice our lives and protect our children. It will take ages for our ground to give us clean water. The earth is now angry with us! This is a holocaust! They have destroyed our lives as well as our children’. They have caused injustice to this earth”.
Another disclosed this story:
“First they brought two water bowsers. Now that doesn’t happen. They don’t go inside the village. Those who  have money pay 100 rupees and get a full tank of water. I saw this. The next tank got only half. Now the water is muddy. We are scared that our children will fall ill. Even in the other village the story is the same. To understand our plight one has to experience this.”
Ven. Siridhamma takes the lead of this burning issue. The villagers have a strong faith on him.
“I live with these villagers. They are quite helpless at this time. We do not want to pay and get water. The officials try to pacify us by giving water for some families in the village.  Our demand is that everyone should get water” says the thero.
“We want the support of all religious leaders. We don’t have anything to do with political parties. But we ask everyone to join us in this struggle to find a solution” he added.
“The people do not know what to do. They are innocent. Some with their opportunistic political agendas try to make use of this struggle. Many groups are waiting to exploit these people. We are helpless, but we are strong. Please join in our struggle for water”. 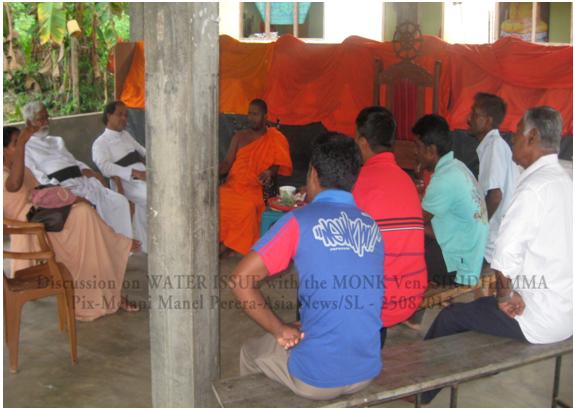 Water is life!
So, what is our duty should be?
The damage caused to one place affects all places.
Today it is Rathupaswala….Tomorrow….?
“I see the suffering of my people in Egypt (villages around Weliweriya)” said Lord (Exodus 3:7 )
Let’s face this plight and be active!