Home » » People Express their Voice Against Oppression in North

People Express their Voice Against Oppression in North

“When a man is denied the right to live the life he believes in, he has no choice but to become an outlaw.”
― Nelson Mandela.

The Protest planned to stage in front of Jaffna bus terminal was prevented by a court order taken by Jaffna (Town) police. According to police information the action has taken due to complains made by several people in Jafna to stop protest which may cause troubles to the public.
There was a trend of taking court orders throughout Sri Lanka when police being informed of an protest event to be held after the end of war in 2009, but, several police requests to prohibit/ Prevent threw away by judges in different areas of the country in later stage.
The prevented Jaffna protest organizers have been aware by police, that this action has been taken by the people and court have accepted the request and given the order to prevent collision and to impairments to the public.
People from several district including Gampaha, Colombo, Ampara, Mannar, Baticaloa and Trincomalee were already on their way to Jaffna to take part in the protest when the police informed the situation at later evening of 14th July.
Since People in Jaffna including residence in IDP camps have been prevented from participating to the event and with the idea to prevent them from more harassment, intended protest converted to mass meeting and it was conducted successfully in Weerasingham hall in Jaffna.


Why so scared for people's Voice?

The situation in Jaffna at the moment is so tense. After getting the court order by  police on banning the protest in A9 road, Jaffna bus stand to District secretariat, now the military personnel had approached the IDP camps to block camp dwellers to take part the meeting we, NAFSO planned to hold at Weerasingham hall, Jaffna town.
At the same time the bus drivers who came from Negombo were threatned to return back immediately from Jaffna unless they will be beaten up and harass.
We want to explain the people who attended the protest about this situation and explain how the oppression, harassments and difficulties the people face every day.
Some of our leaders who attended the protest wanted to reach the place as a march and a debate on whether to march or not.
"Whether we walk to the place we have the meeting or not will no difference to the life of the people here. The military and other oppressions for their decent life is under threat. We need to tell authorities we came here to help people to overcome them." Brito Fernando, Chair person, of disappeared familes explained. 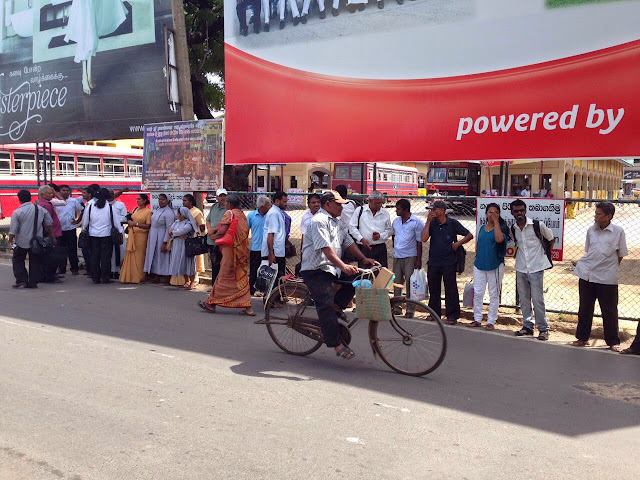 People who came from south and the courageous people who came fron IDP camps, fishers, religious groups, political leaders are conducting the seminar at Weerasingham hall Jaffna now respecting the court order,  instead of the protest at Jaffna bus stand.
Hundreds of people attend the meeting including reveren buddhist monks and reveren christian religious leaders.
It is a great opportunity to extend southern people's solidarity towards oppressed northern people.
Leaders of TNA and other left political parties are with the CSO leaders of the south, artists, media journalists, professionals are in hand in hand with the northern people against the continuous oppression and harassments.
Today incident is clearly indicate the situation of democracy prevailing in the country,  justice to the citizens, space for dissent and how far so called powerful regime scared to the oppressed and marginalized people. This is going totally opposite direction to the LLRC recommendations and also Action plan proposed for implementation of human rights. 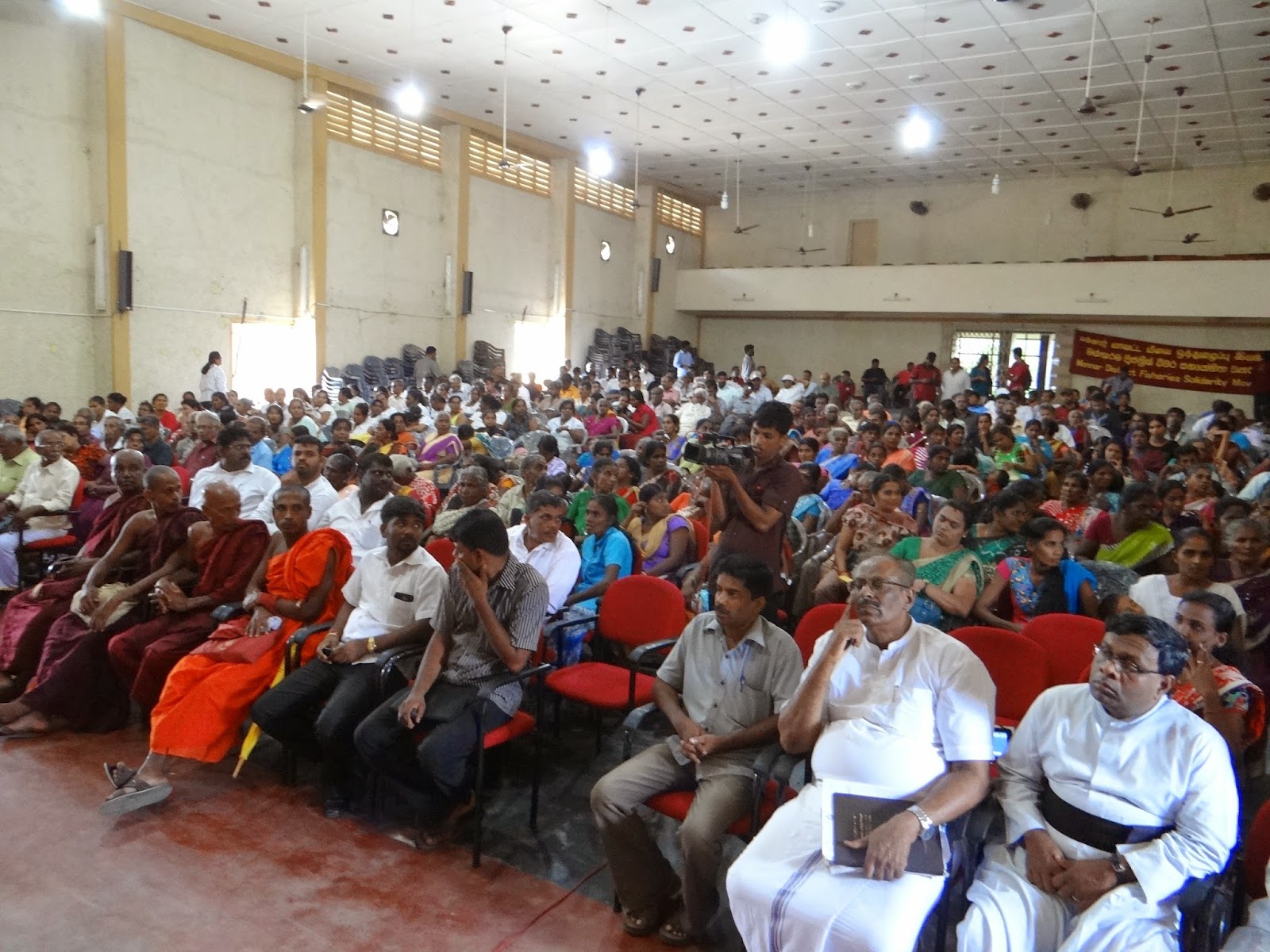 "We are with our oppressed people in the count

The image on Buddhist monks among Tamil people was changed who were in the audience at Weerasingham hall today with the inspiring speech of Rev. Bandiwewe Diyasena thero.
In his speech he said " unless north and southp people unitedly face, yhe the oppression of the regime will continue. We as Buddhist monks as true deciples of Lord Buddha, will be with the oppressed always. We are here today to express our love, care and vompadsion to all human beings, Tamil people in the north who are displaced, oppressed and marginalized in the country."
This is highly appreciated by the People there and wanted to continue the dialogue further in the future. We, as NAFSO reiterate the commitment and our dedication to the unity and harmony of the all ethnic and religious people in the country. 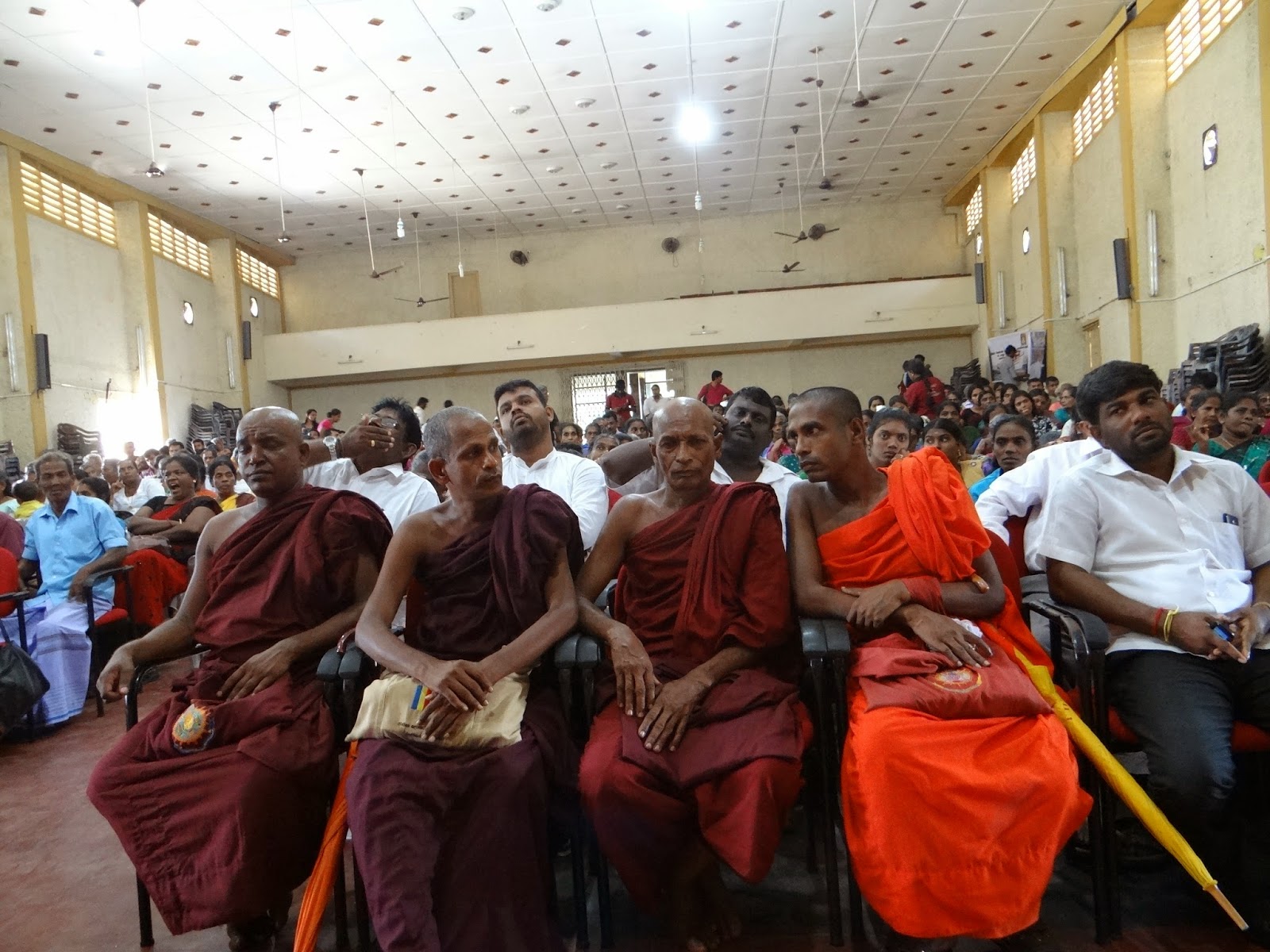 When we organized the IDPand fisher people's protest at Jaffna, police with the help of Rajitha's influence his political fisheries organization henchmen went to the court and got a court order banning the protest.
When we communicated the situation to other CSOs who did not attend the program at Jaffna, the immediate response from one of the CSO leader was, "Atrocious, but expected! Need to take legal action as this has been a violation of fundamental right in which GOSL is also binding under ICCPR of UNHRC and HR Declaration.
Another legal advisor of NAFSO informed us the legal grounds of the case.
"There is a magistrate court decision in Colombo that the police cannot get restraining order without giving the defendants to explain their side of case. Right to peaceful protest can be argued to be within the constitutional right guaranteed."
We want to legally fight on this case and defend the rights of the people legally while engaging for same in the streets.

Brito says "we are shame of our regime"

At the  meeting organized on IDP Land issues and fisher people's issues at Jaffna today, Brito Fernando, the chairperson of the families of the disappeared persons said he is ashame of our President as he badly broken promises he stand for during his tenure as opposition party parliamentarian. "We were very closely worked with Mahinda Rajapakse as an opposition party leader during 1987-1993 period. In fact he was our representative to Geneva to present our case there. We organized a march from Colombo to Kataragama to present our grievances to god. Mr. Mahinda in fact Mahinda aiya (elder brother) was instrumental to form Mother's Front. One of the disappearances people's commemoration meeting  he said "I will not continue in a SLFP regime if there is any disappearances take place. The same Mahinda's regime also commit disappearances. How do we tolerate with this? We are shame of him. Also we are shame of our selves as we trusted him. Even there is no freedom to talk this and take court orders banning them. What a shame is this?

The people who came to Jaffna protest respected the court order and followed the instructions of Police though we want to challenge it legally in a later stage.
What is the necessity to keep and question again and again why we came to Jaffna, did we blame to military, who organized this agitation etc.? I need to answer to these questions again as the chief organizer of the work.
We came to Jaffna to support to internally displaced people who have been displaced for decades due to war and not allowed them to go back their original lands. And also to highlight the Indian trawler issue which is dragging again years without any solution.
In this journey we expected to extend southern people's solidarity over northern people's issues with ethnic and religious harmony too.
It is NAFSO organized this journey with above clear purposes.  That is because the 15th February protest we  organized in Jaffna and 3 major places in the country, commemorating assasination of fisherman Antony Fernando at Chilaw. Antony was killed during the fuel struggle. We organized the protest campaign on the same land issues and fisher people's issues at Jaffna on 15th February was obstructed by the authorities.
They promised to give the land back to IDPs within 3 months from 15th February which is ended 15th May. Today is 15th July and 5 months already gone and no even minor signal to resettle the IDPs as promised.
Southern organizations which lead NAFSO decided to voice out with the voiceless IDPs and fisher people demanding fulfill the promises of 15th February.
This is very reasonable demand together with northern people and southern people in one platform.
Then why these further questioning and harassing people which is not the normal practice though the drivers should report at the both military check points at Elephant pass and Omanthai. Also what is the reason to ask the relationship of the people and the Buddhist monks in the bus? Who organized the protest? Why southern people come here etc etc. And also
taking the photo copies of IDs of the organizers and questioning is scaring people at army check points.
We would like to reiterate that we work within the constitutuonal rights given to the citizens. Even though it is painful we respected the court order which ordered to restrain the peaceful demonstration at Jaffna bys stand. Now we see the violation of constitution rights  by any authority prove this is not a democratic state and it is a militarised authoritarian state.

Voice of Women is powerful in the struggle.!

Sri Vimukthi Fisher Women Organization one of the major contributor to today land campaign at Jaffna. Hundreds of women took part the campaign today amidst the threats and harassments. Melina Kumari Fernando, a brave woman leader was the only woman who addressed todays gathering at Jaffna. In her in put she said "As women we can understand the difficulties our sisters and their children face in their day tiday life. On one hand there are several women who lost their bread winner in the family, On the other hand no safe place to live. Very seriously girl children face these difficulties and as a mother I can feel the sorrows. We urge to resettle all these people immediately immediately in fheir own lands."
So, this is the appeal to all those concern we submitted at Jaffna campaign today. 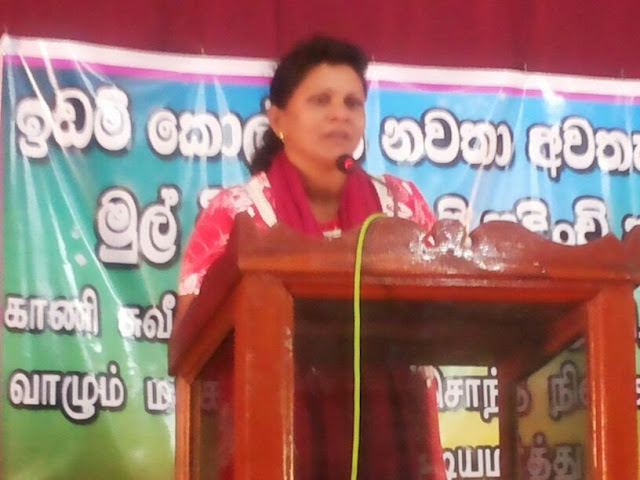 “Where justice is denied, where poverty is enforced, where ignorance prevails, and where any one class is made to feel that society is an organized conspiracy to oppress, rob and degrade them, neither persons nor property will be safe.”
― Frederick Douglass