Blast fishing, commonly referred to as dynamite fishing, an illegal and destructive form of fishing, is on the rise in Sri Lanka and is a serious cause for concern, experts warn.
So far this year, the Sri Lanka Navy and the Police Special Task Force have seized 700 sticks of gelignite and similar explosives from suspects engaging in fishing, or in transporting the explosives.
The Navy has also taken into custody 63 kilograms of ‘water gel’ explosives in the first three months of this year, a significant rise considering that in 2017, the overall haul was 52 kilos.
Last week, the Navy arrested two individuals who are suspected to have used dynamite to harvest nearly 250 kilos of fish off the popular tourist destination Marble Beach in China Bay, Trincomalee. 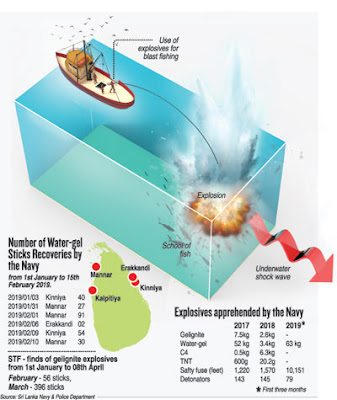 Also last week, a joint raid by wildlife conservation officers and the Navy saw the arrest of eight suspects who were cutting mangroves in Udeiadi lagoon, Wankalai. The Navy suspects that the mangrove branches are used to create small breeding grounds in shallow waters offshore. Once the new habitat attracts a shoal of fish, dynamite is used to harvest the fish.


Dr. Sisira Haputhantri, the head of the marine biological resources division at the National Aquatic Resources Research and Development Agency (NARA), said dynamite fishing is increasing in some areas.
He claimed that measures are being taken to address the issue and pointed out that such fishing practices are not only destructive to the marine eco-environment but also hazardous to those who practise it.
“Sometimes the fishermen target a school of tuna and end up killing dolphins that feed on the tuna and also damage the reefs,” he said.
A task force made up of key stakeholders, including the Fisheries Ministry, NARA, the Police Department, the Navy, state intelligence agencies, and the controller of explosives, has been established to share information and coordinate on maritime crime, Illegal Unregulated and Unreported (IUU) fishing and dynamite fishing, Mr. Ginige Kumara, the director general, Department of Fisheries and Aquatic Resources told the Sunday Times.
Mannar, Kalpitiya, Puttalam, Kinniya, Trincomalee, Batticaloa and Ampara are hotspots for dynamite fishing.
The Fisheries Department warns that fish caught with dynamite fishing is not fit for human consumption. The department, with the assistance of NARA and the police, routinely check fish markets. Several programmes to educate fishing communities are also underway.
The Navy has stepped up coastal and sea patrols to identify and apprehend those involved in dynamite fishing, said Lt. Cmdr Isuru Suriyabandara, the Navy spokesman.
He said explosives on board fishing vessels and their unregulated proliferation, posed a security concern.
“The Navy is working closely with government agencies to identify possible sources of the explosives,” he added.
Dynamite is mostly used in shallow waters by fishermen to gain a large catch in a short time. But the explosive blast shock wave kills and destroys all marine life within its radius.
Usually, gelignite, or since recently water gel (a form of explosives introduced to Sri Lanka in 2011 as a substitute for dynamite) explosives are packed in a waterproof container, or packaged and set off with a length of ‘safety fuse cord’ (a slow-burning fuse) before being thrown into the water near a pool of fish.
Occasionally, high explosives such as TNT and C4 are also used by perpetrators. However, statistics show that water gel type explosives are used widely.
Police sources suspect that gelignite and water gel explosives may come from leakages in explosives issued to quarries.
“The matter is under investigation. Quarries are a big business with all the construction and development work. There are significant stocks of explosives issued to them,” a source said.
Explosives and detonators are also smuggled across the Palk Strait frequently, a police officer claimed.
However, registered stocks of explosives, especially ones at quarries are closely monitored, claimed Mr K.P.R. Pathirana, deputy controller, explosives.
According to Mr Pathirana, officials in each district visit quarry sites and audit the stock of explosives and report to the Ministry of Defence Regularly.
He said there are those who erase or cut out the serial numbers on the water gel sticks to steal them. The explosives have a unique serial number which can be traced to each box that was delivered.
“We take leakage of explosives, no matter how small the quantity, seriously and have advised changes to be made to the serial numbering process and changes will be made in the near future, which will make it hard to remove the serial numbers,” he said.
Marine biologist Nishan Perera, said there is physical damage of coral reefs, including the destruction of coral structures, and a loss of fish biomass and biodiversity.
“Some of the physical damage is irreversible and once the habitat is destroyed, biodiversity and fish stocks do not easily recover,’’ he said.
“There is a high amount of by-catch, or non-target species killed, including juveniles of many species. Habitat degradation also destroys breeding grounds.’’
The damage to coral reefs and breeding grounds can be long-lasting.
Sri Lanka benefits from seafood exports, especially to the United States and the European Union. In 2018, Sri Lanka exported a record US$268 million worth of seafood, according to the Sri Lanka Export Development Board.
On several instances, fishermen who use dynamite have themselves become victims when the explosives detonate prematurely or fall into the boat when being thrown out. They can suffer severe injuries and may require amputation of limbs. In spite of risks and the marine damage, some fishermen are bent on making a quick profit.
Dynamite fishing has been illegal for a long time and there are adequate laws to deal with it, Mr Perera pointed out.
Dynamite fishing is one of five methods of sea fishing proscribed under the Fishery and Aquatic Resources Act of 1996 and its amendments. The laws are adequate; possession or use of dynamite to harvest fish is illegal, arrests are made regularly and when evidence supports the arrests, prosecutions and conviction follow, said Dr Steve Creech, a fisheries expert.
Laws have been revised to increase fines and punishments.
However, punishments imposed by the courts are at times lenient and are not a deterrent, a senior police officer said.
Mr Perera said most fishermen are aware of the damage to fish stocks and the marine ecology from dynamite use.
Source:The Sunday Times
Share this article :
« Prev Post Next Post » Home