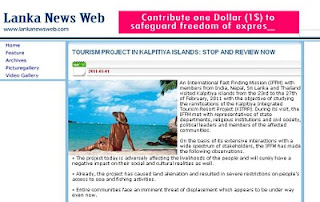 An International Fact Finding Mission (IFFM) with members from India, Nepal, Sri Lanka and Thailand visited Kalpitiya islands from the 23rd to the 27th of February, 2011 with the objective of studying the ramifications of the Kalpitiya Integrated Tourism Resort Project (KITRP). During its visit, the IFFM met with representatives of state departments, religious institutions and civil society, political leaders and members of the affected communities.

On the basis of its extensive interactions with a wide spectrum of stakeholders, the IFFM has made the following observations.

The project today is adversely affecting the livelihoods of the people and will surely have a negative impact on their social and cultural realities as well.

• Already, the project has caused land alienation and resulted in severe restrictions on people’s access to sea and fishing activities.

• Entire communities face an imminent threat of displacement which appears to be under way even now.

• The entire process is suffering from a severe lack of comprehensive, precise and timely information for communities. Non-transparency, non-accountability and non-responsiveness on the part of government resulting in the absence of the possibility and opportunity for the people to participate is a matter of grave concern.

• While a study of the environmental impact of the project (EIA) has been conducted, no such study has been done on its social, economic and cultural impacts. Even the EIA suffers from a lack of precision and depth.

• The KITRP is not in accordance with the Sri Lanka Tourism Master Plan and the Coastal Conservation Act Amendment of 2006. In this context, a lack of collaboration among relevant government departments is apparent.

• To facilitate large scale private sector investment, KITRP has come up with a detailed Investors Guidelines. However, no regulatory mechanism is in place.

• The people strongly resent this tourism project and are resisting it. However, the resistance has been weak so far due to their fear of state repression.

In the light of the above observations, the IFFM recommends the following:

• The project must be stopped with immediate effect. A review should be conducted taking into account the aspirations of the people and their notions of development.

• The review should respect the social, economic, cultural and political rights of the people with information flow, transparency and participation thereby ensuring accountability on the state’s part.

• To address the issue of increasing land alienation, legal land titles should be given.

• Peoples’ livelihoods should not be disturbed on any account. All necessary measures to ensure this such as unimpeded access to coast and such others must be taken.

In sum, the IFFM team affirms that food sovereignty be clearly recognized as a fundamental right and is not compromised in the name of development.