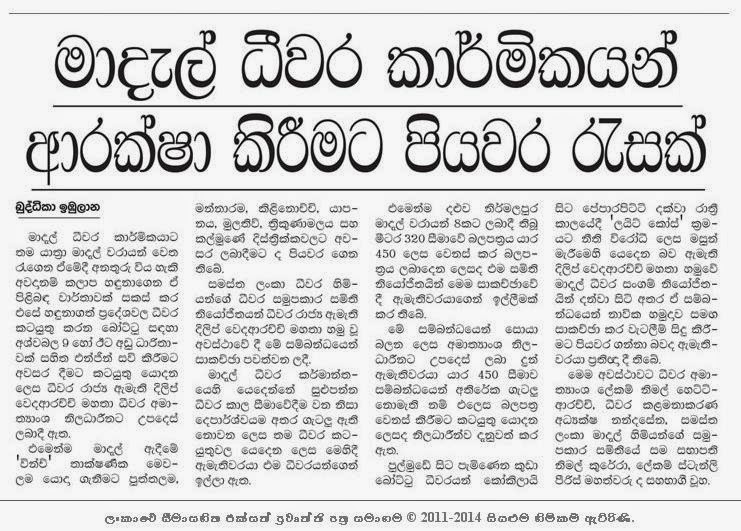 State minister for fisheries in newly elected government has taken several steps to protect fisher people who are engage in BS fishery.  fishers use specially designed non mechanized crafts for netting and actively manage the fishing net in sea while dragging it in to beach by people. Minister have decided to allow the use of 9hp or lesser powered out board engine for these crafts. it will increase the efficiency and protection of fishers in sea where there is high waves are generated as it is conducting near to shore.

BS fishery is a centuries long traditional sub sector in fishery of Sri Lanka. It is conducting based on man power which gives 20 to 100 people a opportunity to earn some amount of money from the fisheries. to conduct BS fishery there should have suitable place including spacious beach area which should be gazetted by the government as a "Madal Paduwa", and should obtain a permit for conducting fishing operation in such place. one or few people who can invest money gets the permit and hire the people to carry the fishing operations which continues for several months in the year.
oceanic fish as a common resource, BS gives maximum opportunity to people to share the value of resource.
But, according to new decision by the state fisheries minister, it will no longer belonging to the resource sharing category. Allowing of use winch instead of man power will allow owner of BS nets and equipment earn maximum profit, but it expels poor fisher people who were depended on BS net operations in considerable time gap in a year.
Mechanization (of traditional sectors) is making it efficient, but at the same time it makes poor people more poor while rich people richer. Policy makers should understand and try to keep the every aspects in balance, not only the profit in such sectors.             .