Two human rights organisations, the Society for Threatened Peoples and Sri Lanka Campaign, have called upon the Government of Sri Lanka (GoSL) to ensure that the prevalent tourism strategy changes as thetourism development programs followed during the past few years have resulted in gross human rights abuses. 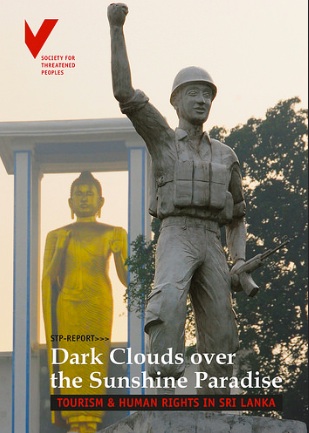 Switzerland based, the Society for Threatened Peoples has compiled a report based on a study they conducted titled ‘Dark Clouds over the sunshine paradise – tourism and human rights in Sri Lanka’ that reveals that systematic human rights abuses have occurred in the country due to tourism development and particularly due to the military involvement in tourism development.
The report notes that human rights abuses have occurred due to:
The report states that through their study it was found that over 1200 families were affected in the newly development tourist regions including Kuchchaveli, Passikudah and kalpitiya, due to these issues and notes that, ‘While GoSL spreads the image of a country that has returned to normality, the reality appears much more disturbing. . .’
The study had also found that the military increasingly focusing its budget on tours with the Army, Navy and Air Force operating HOTELS AND

increasingly offering tourism activities is problematic as it deprives local population of a valuable income sources and also raises major concerns regarding transparency.
The STP has demanded the following from the tourist agencies to better EXERCISE

The Society for Threatened Peoples Switzerland (STP) is today publishing its report "Dark Clouds over the Sunshine Paradise – Tourism and Human Rights in Sri Lanka". The report shows that systematic human rights abuses have been taking place as a result of tourism development in the country: fishermen have seen their access to the sea blocked, land grabbing has taken place and the local population are insufficiently, if at all, informed about planned tourism projects. In the regions that were examined, more than 1200 families were directly affected. The STP Switzerland and Sri Lanka Campaign urgently demand that travel agencies exercise their due diligence with regards to human rights.

More than 1.5 million tourists travelled to Sri Lanka in 2014. The British were the largest Western European tourist group, with 144,168 visitors, followed by the Germans with 102,977 tourists. With more than 20,000 visitors, the Swiss made up the fifth largest tourist group from Western Europe. While the Sri Lankan government has spread the image of a country that has returned to normality, the reality appears much more disturbing.
The STP report looks at whether, and to what extent, human rights abuses relating to tourism development have taken place in the three newly developed tourist regions of Kuchchaveli, Passikudah and Kalpitiya, as well as the degree to which the local population can actually profit from the tourism boom. The results are sobering: in these regions, hotels and resorts block fishermen's access to the sea, which pose a major threat to the economic livelihoods of entire families. There have been instances of land grabbing and only a small section of the local population is able make a living through tourism.
Moreover, the military is increasingly focusing its budget on tourism with the army, navy and air force opening hotels all over the country and increasingly offering tourist activities. The provision of tourism services by the military is problematic since it deprives the local population of a valuable income source. It also raises major concerns with regards to transparency.

Travel agencies are responsible
Despite the troubling human rights situation, at least 49 German and 21 Swiss travel agencies and their British subsidiaries offer hotels in the three tourist regions. The STP and Sri Lanka Campaign welcome the current voluntary efforts of some individual travel agencies to better exercise their due diligence concerning human rights. Nevertheless, the report shows clearly that, in the case of Sri Lanka, these efforts are not sufficient to prevent lacking consultation processes, land grabbing, displacements and restrictions on access to the sea.

Demands
- Travel agencies must not offer hotels that are built on grabbed land, that restrict the access of local fishermen to the sea, that discriminate against women and minorities and that forbid or restrict unionisation of employees.
- Travel agencies must not offer hotels which are managed by the military or which offer tourist activities provided by the military as long as it cannot be proven that this was not based on illegal land grabbing or other human rights abuses.
- Travel agencies must regularly monitor and ensure the exercise of due diligence concerning human rights throughout their entire value-added chain, including the hotels and other tourist activities that they offer, and guarantee that no human rights are abused through the activities of their suppliers and service providers.
-Travel agencies should introduce grievance mechanisms that are available to the affected population. Human rights violations in tourism must be counteracted through concrete means and abuses must be remedied.

In addition, the STP und Sri Lanka Campaign demand that the Sri Lankan government changes its tourism strategy, that it enforces the relevant laws and guidelines and that it protects the population, including all minorities, from human rights abuses. Sri Lanka needs economic development in tourism. However, this must not come at the cost of human rights abuses, land grabbing or displacements. It is demanded that Swiss travel agencies pay closer attention and exercise their due diligence with regards to human rights.

The complete report can be downloaded here: