Home » » “PORT CITY IS NOT BENEFICIAL BUT DETRIMENTAL TO SRI LANKA”

“PORT CITY IS NOT BENEFICIAL BUT DETRIMENTAL TO SRI LANKA”

Prime Minister Ranil Wickaramasinghe in his media conference held on the 10th April 2016 stated that the Government of China and Government of Sri Lanka agreed to continue with the so-called Colombo Port City project and provide 1000 acres of land in Hambanthota and Mattala to locate Chinese industries.

Mr. Wickramasinghe, then as the opposition leader took a stand against the Port City project highlighting the adverse effect it would have on fishing industry and of the fishing community from Colombo to Kalpitiya towards north and from Colombo to Hikkaduwa along the southern coast. Further, he too emphasized on the negative effect the project would have on tourism industry.

It is very unfortunate that Mr. Wickramasinghe, now as the Prime Minister of the Government of ‘Good Governance’, not only acting against his own words but also against the promise that he made to millions of people who voted him to power trusting his pledge.

Although the project is planned as an offshore financial market, so far there are no regulations in place to control it commercial enterprises. There is a danger that it might become a centre for money laundering and illegal commercial activities.
It has to be emphasized that the so-called government of good governance is violating the very basic principle on which it stands. Can the Prime Minister make decisions on this matter ignoring the two pending cases in the Court? One might wonder where is the rule of Law?

Moving ahead with the project without taking into account the concerns of the people affected, the fishing community, the people who responded adequately to the EIA report and the concerns of the civil society which has not only highlighted their grave concerns but vehemently opposed the project due to its adverse effect on our ecosystem is a violation of their basic right for participation in good governance and decision making. We wish to ask where is the space for People’s Participation, which is a hallmark of democracy and good governance?

It has to be stated that this type of senseless development is tantamount to transferring the wealth and the physical resources such as sand, rock materials, land, Colombo harbor, Mattala Airport and Hambanthota harbor of the country to China making Sri Lanka poorer.

“Can mere mortgaging this land to China or any other big power be called development, Fr. Sarath Iddamalgoda the joint coordinator of the People’s Movement Against Port City asked. Fr. Iddamalgoda also raised the question as to whether the Prime minister has assured the integrity and safety of our natural resources and the rights of the people with regard to the environment.
“Prime Minister has no reason to celebrate 1.5 billion USD Chinese project when the project is going to dump sand and rock material worth over USD 4 billion to fill the ocean with no equity equivalent ” said Mr. Hemantha Withanage, joint coordinator of the People’s Movement Against Port City and a Environmentalist.

“Port City is not and standalone project of China. Therefore, this is feasible for China, however there is no study to prove that it is feasible for Sri Lanka” said Chinthaka Rajapakshe, joint coordinator of the People’s Movement Against Port City.
It is a well-known fact that China is looking for Sri Lanka as a strategic point in its ‘ONE ROAD ONE BELT’ strategy and also for relocating its polluting industries to manage severe environmental pollution China is facing at the moment. It is an obligation to fulfill the climate agreements they made during the climate conference held in Paris in December 2015.

Colombo Port city the Chinese dream is not part of the Megapolis, which is the dream of the ruling regime.  The government should stop lying people of Sri Lanka promising brighter future though this unsustainable development businesses. 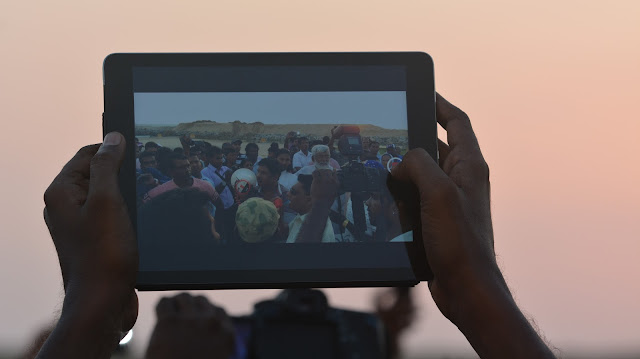 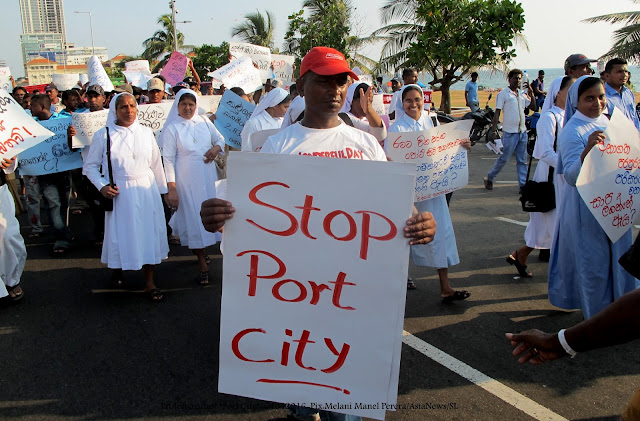