Home » » A media conference was held in Jaffna

A media conference was held in Jaffna

A media conference was organized by National Fisheries Solidarity Movement in the center of Alliance of Northern Province Fisher People on 1st of February 2013 in Jaffna. N. Inbanayagam who is a coordinator of National Fisheries Solidarity Movement leaded the conference and there were five members who live in welfare camps as a result of war since 1990.   Mr. Priyankara costa, Lavina Hasanthi, Pradeep Laksiri and  Jesudasan who represent the secretariat of National Fisheries Solidarity Movement also participated the conference.
Most of people who became  as internal displace peoples because of the war in Kankasanthurei, Palali, Mallagam, Vadamarachchi and Kiyadi areas since 1990 are still living as refugees.  They have to live in temporally houses and shelters which have been built in privet owner’s land with many difficulties although they have their own land but they are used as High Security Zones by the forces. People are not permitted to enter those lands. People complain that there is no any process to resettle the refugees properly although almost four years have completed  after the war. People have been permitted to resettle in the villages of Koovil,Valithundal. but people return to the existed refugee camps back because of not having any basic facilities to live in these villages.
National Fisheries Solidarity Movement implements different programs even the programs which assist them to increase the income with internal displace peoples who are living in the seven refugee camps in Jaffna.  When we engage with them, they request from us to be concerned locally and internationally their issues as refugees. There for, we decided to organize a media conference because of above reason in that day. So, some issues which were presented in the media conference have been published through many Media. Those are given below.
People are able to live comfortably in the North if they have decentralization of power only
Said by National Fisheries Solidarity Movement
Walampuri paper -02, 02, 2013

National Fisheries Solidarity Movement emphasized that Tamil people are able to comfortably live without any threaten if they only have decentralization of power in the North and East. People who effected due to the war until have been stayed in temporally camps without properly resettling even three years spent after the war.  Land of them has been captured by forces.  People who are in the camps have faced any kind of harms and future of the women is in a terrible position.
”We do not want to assist, give our land back, people be humble “
Military government is yet in the North
Blamed by National Fisheries Solidarity Movement
Udayan paper-02.02.2013

A military government is conducted even present in the North. The government exactly will tell an erroneous story informing as all IDPs have been resettled in the human right conference in next March.  Thousand of people in the families are expecting to resettle, said by A. Jesudasan who is the coordinator of National Fisheries Solidarity Movement. He emphasized that the government will exactly tell the lie presenting as all people resettled.
People who displaced due to the war in 1990 have been until living as refugees  in welfare camps even after 24 years because of not having a  proper resettlement system.  The government does not think about basic rights and solutions for the issues of the people who are currently living in camps.  People live in high security zones and military government areas. LLRC report has recommend to reduce the activation of forces and release the lands to their owners back but these recommendations were not done in the North. There is a military government in the north yet. There are many problems in the areas where there was the last war. Even basic infrastructures were not built in that areas but the government says that resettlement was completed there.

Antony Jesudasan who is the national coordinator of National Fisheries Solidarity Movement says that we are ready to meet ambassadors in overseas countries to be concerned the resettlement of the people in Valikamam North.
If there is no decentralization of power, it is unable to solve even basic problems in the North an East, he mentions further.
He said these ideas yesterday evening at the media discussion which was organized by National Fisheries Solidarity Movement in the center of Alliance of Northern Province Fisher people located in the main street in Jaffna.

N. Imbayagam who is the Jaffna district coordinator of National fisheries solidarity Movement and some representatives of the people who are living in the refugee camp in Valikamam North participated to the discussion.
People who came from Valikamam North expressed their viewpoints in the discussion. One of our generations is living in the camps. We were informed to move from the camps being given a two month period for that. Responsible government officials say us to buy other lands and settle of them. They do not mention any ideas about our resettlement in our own lands. They attempt us to be removed for other places form where we settled right now. We who live in the refugee camps have no strong economic condition to buy lands. We are unable to  continue our children’s education. We who survive on the labor work are unable to have even three meals of the day. It is difficult  to be sewed our children’s uniform although they have been given freely. We are unable to be married our daughters. We can not look after our children properly on this complex house system. We are gradually coming closer to die on hunger.
We did not combat having weapons but we had to face many castigations. If any body thinks that people should fall on his legs to get their own lands, we are ready to do that, people said with tear eyes.
Expressing the national coordinator of National Fisheries Solidarity Movement he said that National Fisheries Solidarity Movement is campaigning about the invasion of Indian trawlers, migration of southern fishermen and political solution. We are  ready to be internationally concerned about this issues. We hope to implement this through the foreign embassies. 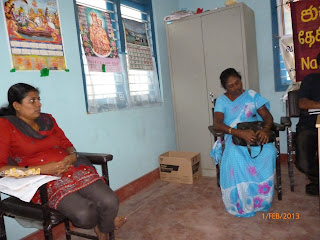 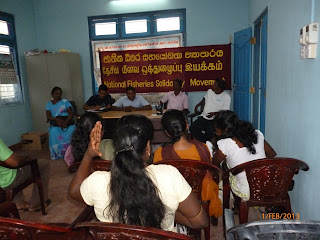 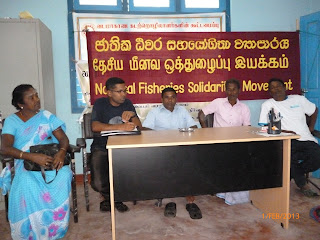 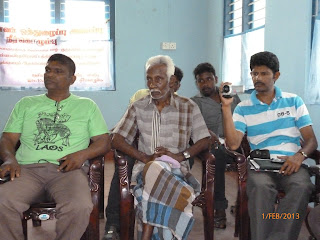