Home » » Media briefing on Land issue in the north

Media briefing on Land issue in the north 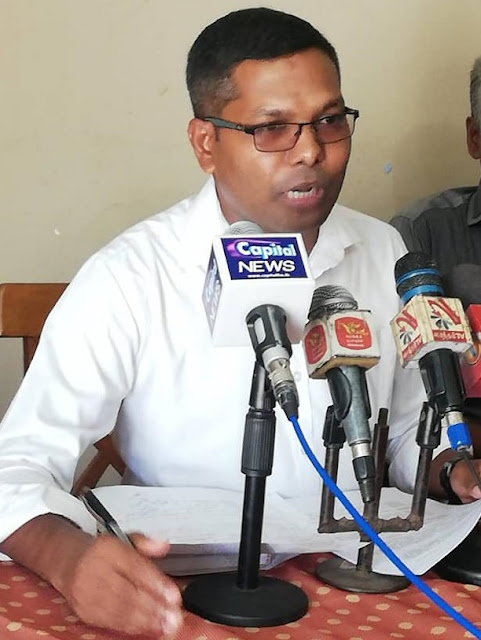 The National Fisheries Solidarity Movement facilitated to organize a media briefing in order to highlight the land issues in the North on 29th of June 2019 in Jaffna. The purpose of this media briefing was to convince the President, Prime Minister and other relevant authorities about the land grabbing in the north as well as find the solution for this issue. It mentioned that the government has changed their focus after the Ester Sunday attack on 21st of April, 2019 because after this attack, the government tightened the security by using extra forces in the north. The government has forgotten to release the land for the land owners and continue the resettlement process as planned.  It seems that the government is functioning without a responsibility   presenting different reasons not the release grabbed lands. The government is unable to escape from their responsibility. The government should concern to release the grabbed land and ensure the land rights of the effected people due to the war.


It mentioned some statistics in relation to grabbed lands in Kepapilave. According to the information, 171 acres should be released to the people in Kepapilave.  There is a request to distribute some lands which were belonging to the Tamil people in the area for Sinahala community.  The particular faddy land is located near by the mouth of the river. We want to highly concern about this situation for government authorities. We would like to request to ensure the land right of the people in the area first.


There is another sensitive issue in the north. Buddhist temples are being built in some places where the Tamil people were living in the North. As examples, the Buddhist temples have been built in Neeraviyad, Vattuwacal, Kokilai and Nawamkui in the north.  The government should implement a research in order to find definite information about this process and government should introduce a solution for this issue. There may be some conflicts among the nations based on this incident in future. Government should take action in this movement to mitigate the tense situation.


The churches and grabbed lands should be released to the people


There are some procedures to capture the land of the people saying that the particular lands belong to the Land and Forest department, department of wildlife conservation or Department of archaeology in the north.  The President, Prime Minister and Governor should concern about this situation.


There are 3,918 acres which belonged to the internally displaced people due to the war since 1990 to release in Jaffna. The particular lands should be released as soon.


Around 49,000 acres have been reserved for a national century and another 49,000 acres have been reserved for a bird’s century in Wadamarachchi but there is no clear understanding of the people about these reservations.
Women are the major group who effect as a result of the displacement and land grabbing. They have been pressured in mentally and physically. The Ministry of women affair should concern this situation to
Share this article :
« Prev Post Next Post » Home