Home » » Red Salute to Tom! :Thomas Kocherry, an Icon on Fisher People in the World!

Red Salute to Tom! :Thomas Kocherry, an Icon on Fisher People in the World!

Thomas Kocherry, an Icon on fisheries world, one of the founding member and the first coordinator of World Forum of Fisher Peoples'[WFFP], a fisheries leader from India, well known as "Tom" had passed away 5 years ago. Tom and Harekrishna of National Fish Workers Forum in India were the most instrumental persons behind the formation of World Forum of Fish Workers and Fish Harvesters, [today known as WFF], together with Francous of Canadian Council and Mohommed Ali Sha of Pakistan. The WFF was formed in 1997 at New Delhi and it is a politically very important event of the small scale fishers in the world.
Tom, came to Sri Lanka in the year 1999, with the invitation of NAFSO as the coordinator of WFF, which was a remarkable time of Sri Lankan multi day fish workers. There were 35 deep sea fishing vessels with over 185 fish workers were arrested in Indian boarders and kept in Madurai and Kochin prisons claiming the Sri Lankan fishers were cross the Indian boarder and violate the International Maritime Boundary Line. Those fishers were not released more than a year and since the fisher families were scattered in Negombo, Beruwala, Kalpitiya, Thoduwawa and Chilaw areas, and the families, the women of the arrested fish workers were desperately need the assistance for get release the fish workers from the Indian prisons.
The relevant ministers of the then Govt. washed their hands saying, "If those fish workers gone to other people's estates to rob the coconut, they should suffer and we are nothing to do with that."

NAFSO organized a meeting convening the affected families, the women in the affected families and raised the issue with Tom in Cardinal Cooray Center at Negombo. Immediately Tom said, "Let us organize a protest in front of fisheries ministry as well as in front of Indian High Commission, demanding Govt to intervene and get release the Sri Lankan fish workers from Indian prisons."
Following day, NAFSO organized a successful protest with hundreds of women and children who were crying and living helpless and the protests held at Maradana and Galle Face demanding to release Sri Lankan fish workers.
Not only that, Tom he himself is a lawyer[not only a priest] mediate to get release the Sri Lankan fishermen from Indian prisons intervene appearing the Indian courts.
This is part of the history of our Sri Vimukthi Fisher Women Organization, in Negombo.
Nirmala Fernando, one of a woman of the affected families remembered Thomas Kocherry with tears and said, "We can not forget our beloved father Kocherry as he gave the leadership to get release my husband Benil from Kochin jail in 1999."
There are hundreds of women who are still reminding Fr. Thomas Kocherry whom got the help for the detained fish workers in Negombo and Kalpitiya.
Tom depart us on 3rd May on 2014 and we commemorate his 5th anniversary of his demise today. 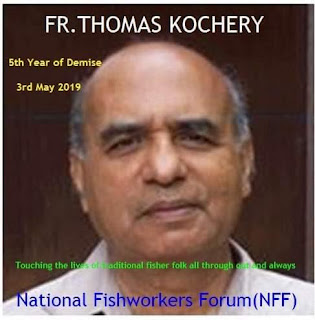